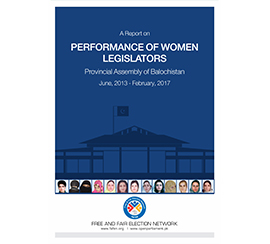 Quetta, March 12, 2017: The women lawmakers contributed 16% agenda of Balochistan Assembly during last 44 months while all women lawmakers participated in the proceedings, says Free and Fair Election Network (FAFEN) on Sunday in a report on Performance of Balochistan Assembly’s Women Legislators during the period between June 2013 and February 2017.

A ceremony was arranged at the Balochistan provincial capital to pay tributes to women legislators for their remarkable contribution in enriching the agenda of the House. Speaker Balochistan Assembly Rahila Hamid Khan Durrani was the Guest of Honour, who presented shields to women lawmakers on behalf of Trust for Democratic Education and Accountability – Free and Fair Election Network (TDEA-FAFEN). The ceremony was continuation of events being held in provincial capitals to honor provincial women lawmakers for their parliamentary services.

Speaker Rahila Hamid Khan Durrani appreciated women lawmakers’ efforts to raise women issues in the Assembly and play their role in women empowerment despite all challenges.

Executive Director Center for Peace and Development Nasrullah Khan Barech congratulated women lawmakers on performing well in the Assembly despite considerably low representation. He stated that the forums like Women Parliamentary Caucus should be used to create synergies on enhancing the role of women in political and electoral processes.

TDEA-FAFEN Chief Executive Officer Shahid Fiaz addressed the meeting on role of elected representatives in good governance and applauded the efforts of women lawmakers to highlight governance issues in the Assembly. He urged the lawmakers to strengthen their oversight role by asking more questions and holding more debates on educational and health problems.

TDEA-FAFEN representative Shehzad Anwer presented the findings of the report on the performance of women legislators. According to the report, women make up 46% of Balochistan’s population while their representation in the Provincial Assembly is 20%. There are 13 women lawmakers in the incumbent Provincial Assembly of Balochistan. A woman lawmaker represents nearly 358,292 women in the Assembly whereas each male lawmaker represents 105,186 men.

These women legislators initiated nearly 16% business of the Provincial Assembly of Balochistan during last 44 months. The women sponsored nine percent business independently and seven percent in collaboration with male lawmakers.

All women legislators participated in the proceedings by submitting agenda or speaking on floor of the House. Five out of 13 women submitted agenda as well as took part in discussion while the remaining eight women only participated in discussions. On average, every woman lawmaker contributed five agenda items during the reporting period.

The women lawmakers sponsored 29 out of 199 (15%) resolutions independently and 59 (30%) collaboratively with male lawmakers. The women did not use questions as a tool of executive oversight as frequently as they did Adjournment Motions. They moved nine (36%) Adjournment Motions and asked 34 (6%) questions during the reporting period.

The Balochistan Assembly, as an institution, responded to various women specific issues and passed two government bills and a resolution on such matters during the reporting period. The legislation on women issues was done in wake of the devolution of the department of women development to the provinces under Eighteenth Constitutional Amendment. The legislation addressed breast-feeding, domestic violence and harassment at workplaces.