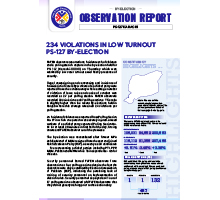 ISLAMABAD, September 8, 2016: FAFEN observers reported one incident each of violence and a polling station capture in the by-election held for PS-127 (Karachi-XXXIX) on Thursday which was marked by low voter turnout amid heavy presence of security.

Illegal campaigning and canvassing and incidents of intimidation of voters by workers of a political party were reported from the constituency where average number of violation of laws, rules and codes of conduct was recorded at 2.7 per polling station. FAFEN observers recorded 234 violations at 87 polling stations. This ratio is slightly higher than the recent by-elections held in Punjab where this average remained 2.4 violations per polling station.

An incident of violence was reported from Polling Station No. 67 in which one person was severely injured. Armed workers of a political party captured Polling Station No. 61 for at least 20 minutes in first half of the day, forcing voters and FAFEN observer out of the premises.

The by-election was necessitated after former MPA Ashfaq Mandi of MQM resigned from the seat and joined Pak Sarzameen Party (PSP). As many as 20 candidates – five representing political parties including PTI, PPP, MQM, Pasban and MWM while 15 independents- ran for the seat.

FAFEN trained and deployed 29 non-partisan observers – 26 men and three women- to observe a total of 134 polling stations established by the ECP. However, this preliminary report is based on the information received telephonically from 87 polling stations. The observers were trained to observe the opening, closing and counting processes of the election.

The election managers in the constituency could not curb illegal campaigning and canvassing in full as party camps were observed to be present within the 400-yards radius of 18 polling stations. Similarly, candidates were seen to be providing transport to their voters at 10 polling stations. Instances of breach of secrecy were also reported from 11 polling stations where unauthorized persons were accompanying voters behind secrecy screens.

There were 207,468 registered voters in the constituency. Among them 116,112 were male and 91,356 were female. ECP established 134 polling stations in the constituency – one male, one female and 132 combined. A total of 521 polling booths were set up for the by-poll. The ECP had declared 66 polling stations highly sensitive while the remaining 68 were declared as sensitive.