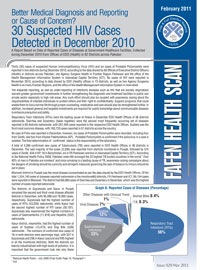 Thirty (30) cases of suspected Human Immunodeficiency Virus (HIV) and six cases of Probable Poliomyelitis were reported in four districts during December 2010, according to FAFEN’s monthly Health Scan, a report based on the compilation of data of the cases of a selection of diseases collected by the Offices of Executive District Officers (Health) across Pakistan.

While FAFEN Governance Monitors approached EDO (Health) Offices in 108 districts in six regions during December for this data, EDO (Health) offices in only 60 districts responded with verifiable and complete information — 24 in Punjab, 18 in Khyber Pakhtunkhwa (KP), 12 in Sindh and six in Balochistan. The Agency Surgeon Health of Frontier Region Peshawar and office of the Health Management Information System of Islamabad Capital Territory (ICT) also shared the data on same count with FAFEN Monitors; hence a total of 62 verified forms were used in the analysis.  EDO (Health) offices in Mansehra, Faisalabad, Quetta, Rawalpindi, Khyber Agency, Sialkot, Upper Dir, Swabi and Lahore denied the provision of this information to FAFEN.

While the disease reportage in 62 districts during December 2010 did not show any disconcerting trends as compared to the previous months, the EDO offices in Gujrat verified that 29 cases of HIV had been reported in the district during December 2010. Similarly the EDO office in Haripur confirmed reportage of one such case in the district. In November 2010, EDO (Health) offices in 73 districts, two Agency Surgeons in as many Frontier Regions, and the office of the Health Management Information System in Islamabad that provided the number of the reported cases of diseases did not report any HIV case.

The disparate and under reporting of infections such as HIV that are also socially stigmatized warrant greater government investments in further strengthening the diagnostic and treatment facilities in public and private sector especially in high risk areas. Any such effort should also be coupled with awareness raising about the responsibilities of infected individuals to protect others and their right to confidentiality. Support programs that could enable them to live a normal life through proper counseling, medication and care should also be strengthened further. In addition, increased general and targeted investments are required for public knowledge about communicable diseases to enhance precaution and safety.

Larkana and Haripur reported four and two cases of Probable Poliomyelitis, respectively. A case is classified as Probable Poliomyelitis if the poliovirus has not been isolated, or for which an alternative diagnosis is not found following clinical and epidemiological investigation. The final determination of “confirmed” status is the responsibility of the laboratory.

Mianwali district in Punjab was the most disease-concentrated as per the data shared by the EDO (Health) offices. Of the total 1,324,740 cases of diseases reported nationwide, 99,154 cases were reported in Mianwali. The districts of Gujranwala and Kasur in Punjab remained the second and third most disease affected areas in December with 95,488 and 78,905 cases, respectively. Both the districts are heavily industrialized with high pollution levels.