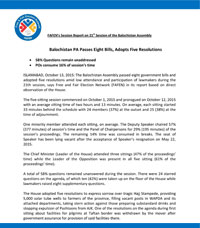 ISLAMABAD, October 13, 2015: The Balochistan Assembly passed eight government bills and adopted five resolutions amid low attendance and participation of lawmakers during the 21th session, says Free and Fair Election Network (FAFEN) in its report based on direct observation of the House.

The five-sitting session commenced on October 1, 2015 and prorogued on October 12, 2015 with an average sitting time of two hours and 13 minutes. On average, each sitting started 33 minutes behind the schedule with 24 members (37%) at the outset and 25 (38%) at the time of adjournment.

One minority member attended each sitting, on average. The Deputy Speaker chaired 57% (377 minutes) of session’s time and the Panel of Chairpersons for 29% (195 minutes) of the session’s proceedings. The remaining 14% time was consumed in breaks. The seat of Speaker has been lying vacant after the acceptance of Speaker’s resignation on May 22, 2015.

A total of 58% questions remained unanswered during the session. There were 24 starred questions on the agenda, of which ten (42%) were taken up on the floor of the House while lawmakers raised eight supplementary questions.

The House adopted five resolutions to express sorrow over tragic Hajj Stampede, providing 5,000 solar tube wells to farmers of the province, filling vacant posts in WAPDA and its attached departments, taking stern action against those preparing substandard drinks and stopping expulsion of Pashtoons from AJK. One of the resolutions on the agenda during first sitting about facilities for pilgrims at Taftan border was withdrawn by the mover after government assurance for provision of said facilities there.

Two adjournment motions to curb begging practice and action against those candidates submitting fake degrees for induction in education department were withdrawn by the movers after government assurance to address these issues. An AM about expulsion of Pashtoons from AJK was converted into resolution which was adopted by the House.

Five legislative reports by their respective Standing Committees while two bills – the Balochistan Private Educational Institutions (Promotion, Regulation and Registration) Bill 2015 and the Establishment of the Balochistan Institute of Nephro-Urology Quetta Bill 2015 – were passed without referring them to the relevant committees after being exempted from Rule 84 of the Rules of the Procedure of the Balochistan Assembly.

During the fourth sitting, PML-N lawmaker pointed out the quorum which led to the adjournment of the sitting for 43 minutes.

In the fourth sitting, JUI-F and ANP lawmakers walked out the sitting for 47 minutes for not referring the Balochistan Private Educational Institutions (Promotion, Regulation and Registration) Bill 2015 to the relevant committee for further deliberations. A PML-N lawmaker walked out of the House during the fifth sitting against the attitude of the Chair for 45 minutes.

This session report is based on direct observation of the Balochistan Assembly proceedings conducted by Center for Peace and Development (CPD) – a member organization of FAFEN. Errors and omissions are excepted.