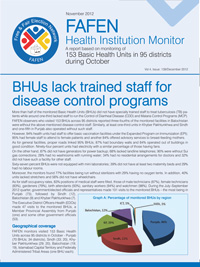 ISLAMABAD, December 11, 2012: Half of the monitored Basic Health Units (BHUs) did not have specially trained staff to treat tuberculosis (TB) patients while around one-third lacked staff to run the Control of Diarrheal Disease (CDD) and Malaria Control Programs (MCP), says a Free and Fair Election Network (FAFEN) report released here on Tuesday.

According to the data collected from offices of District Health Officers by FAFEN monitors (October 2011 – September 2012), on average, 2,281 people are affected by tuberculosis every month. The number is 3,208 for malaria and 420,140 for diarrhea and dysentery.

FAFEN observers who visited 153 BHUs across 95 districts during October observed that most BHUs – 75% – in Balochistan did not have trained staff for running disease control programs. At least one-third health units in Khyber Pakhtunkhwa and Sindh and one-fifth in Punjab also lacked staff.

Unavailability of disease control staff at the BHUs shows weak implementation of health policies and lack of informed government oversight. However, 94% health units had staff to offer basic vaccination facilities under the Expanded Program on Immunization (EPI); 95% had female staff to attend to female patients and another 84% offered advisory services to breast-feeding mothers. As for general facilities, proper roads linked 95% BHUs; 87% had boundary walls and 84% operated out of buildings in good condition. Ninety-four percent units had electricity with a similar percentage of those having fans.

On the other hand, 87% did not have generators for power backup; 68% lacked landline telephones; 90% were without Sui gas connections; 28% had no washrooms with running water; 34% had no residential arrangements for doctors and 32% did not have such a facility for support staff.

Sixty-seven percent BHUs were not equipped with mini laboratories; 39% did not have at least two maternity beds and 29% had no labour rooms. Moreover, the monitors found 77% facilities being run without sterilizers with 29% having no oxygen tents. In addition, 40% units lacked stretchers and 56% did not have wheelchairs.

As for staff occupancy rates, 83% positions of medical staff were filled, those of male technicians (87%), female technicians (83%), gardeners (79%), birth attendants (93%), sanitary workers (94%) and watchmen (98%). During the July–September 2012 quarter, government/elected officials and representatives made 101 visits to the monitored BHUs – the most being in Punjab (47), followed by Sindh (12), Balochistan (9) and Khyber Pakhtunkhwa (7). The Executive District Officers-Health (EDOs) made 47 visits to the monitored BHUs, a Member Provincial Assembly from Punjab (one) and some other government officials (53).