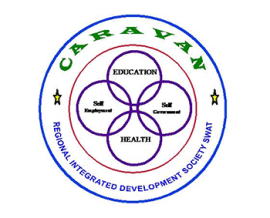 CARAVAN is a local NGO working in Khyber Pakhtunkhwa and AJK. The inspiration behind the establishment of the organization is the affiliation of some of its founding members with the then Pak/Swiss Kalam Integrated Development Project (KIDP) in the early eighties, which was one of the first ever initiatives in Khyber Pakhtunkhwa  working through community participation in development process and resource mobilization. After the winding up of KIDP in the late 1990s, the ex-staff members introduced the idea to other like-minded social workers and development professionals across the province to launch an organization that would not only continue their efforts to invest in the social capital already created by KIDP but also to replicate the approach and efforts in other backward areas of the province. The outcome of these deliberations and efforts was the creation of CARAVAN in the year 1998. As is clear from the name, CARAVAN means traveling together for safety and prosperity. CARAVAN is a voluntary not-for-profit organization dedicated to social & economic development with due regard for ecological conservation, gender mainstreaming and social protection, specially focusing focus the backward areas. The founding members have got rich experience in social engineering, participatory development, gender mainstreaming and poverty alleviation initiatives through resource management in a systematic approach. The NGO focuses on the ignored and marginalized segments of the society like the poor, women and people living in remote mountainous regions, thus empowering and enabling them to bring them on the grassroots level to the mainstream of development process.