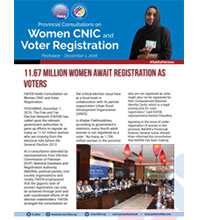 FAFEN holds Consultation on Women CNIC and Voter Registration PESHAWAR, December 1, 2016: The Free and Fair Election Network (FAFEN) has called upon the relevant government authorities to pace up efforts to register as many as 11.67 million women who are missing from the electoral rolls before the General Election 2013. At a consultation attended…

END_OF_DOCUMENT_TOKEN_TO_BE_REPLACED

ISLAMABAD, November 25, 2015: The difference in male and female voter registration widened from 10.97 million in May 2013 to 11.65 million in September 2015, indicating at the need for urgent efforts by political parties and the Election Commission of Pakistan (ECP) to maximize women’s voter registration ahead of General Elections 2018, says a statement issued by Free and Fair Election Network (FAFEN) on Wednesday.

END_OF_DOCUMENT_TOKEN_TO_BE_REPLACED

ISLAMABAD:  The Free and Fair Election Network (FAFEN) urges the Election Commission of Pakistan (ECP) to take immediate measures to ensure the maximum access of eligible voters to check that their names are included on the new Electoral Rolls, which

END_OF_DOCUMENT_TOKEN_TO_BE_REPLACED

ISLAMABAD: The Free and Fair Election Network (FAFEN) has called upon Chief Election Commissioner Justice (Retd) Qazi Muhammad Farooq to take immediate measures to bridge the gap between the 18-year-old or above population and the number of voters registered on the draft

END_OF_DOCUMENT_TOKEN_TO_BE_REPLACED
12
Prev page
Press Releases Categories
All rights reserved. Any part of the webpage may be produced or translated by duly acknowledging the source, all content is copyrighted © 2006-2020 Free & Fair Election Network