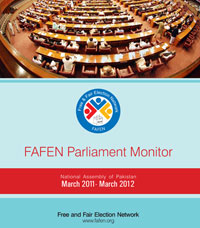 National security, political instability, civil-military relations, executive-judiciary tension, and the energy crisis largely defined the agenda for the 13th National Assembly during its fourth parliamentary year that ended on March 16, 2012. The year was particularly tumultuous for Pakistan as well as for the legislature in terms of agenda-setting that was difficult and critical.

END_OF_DOCUMENT_TOKEN_TO_BE_REPLACED 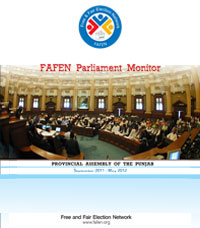 Amid national security concerns, poor law and order situation within the province, and demands for new provinces, the Punjab Assembly met for eight sessions between September 2011 and May 2012. Amendments to federal level laws to suit provincial needs were a high priority on the agenda in the post -18th constitutional amendment scenario. The proceedings were marked by frequent tussles between…

END_OF_DOCUMENT_TOKEN_TO_BE_REPLACED 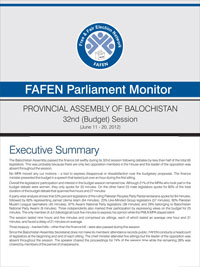 ISLAMABAD June 27, 2012: Only 29 out of 65 Members of the Balochistan Assembly spoke on the budget 2012-13 for almost 60% of the 32nd session time that concluded on June 20, says a Free and Fair Election Network (FAFEN) preliminary report on Wednesday.

END_OF_DOCUMENT_TOKEN_TO_BE_REPLACED 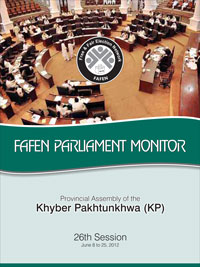 Less than half of the legislators in the Khyber Pakhtunkhwa Assembly took part in the debate on budget for 51% of the session time. Seventy-one legislators-among them 55 men and 16 women-did not express their views at all. The session, that persistently witnessed low attendance, lasted 33 hours and 40 minutes and comprised 12 sittings.…

END_OF_DOCUMENT_TOKEN_TO_BE_REPLACED

Lackluster debate on budget amid low attendance of MPAs and exchange of hot words between the treasury and the opposition benches that led to a physical brawl in the House marked the Punjab Assembly’s 38th session. The session that concluded on June 23 saw less than one-fourth – 24% of the current membership of 369…