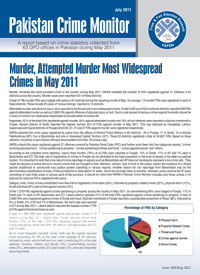 Murder, attempted murder most widespread crimes in May 2011

Murder remained the most prevalent crime in the country during May 2011. FAFEN collected the number of FIRs registered against 27 offences in 63 districts across the country. Murder cases were reported in 61 of these districts. A total of 790 murder FIRs were lodged with police in 61 districts during the reporting month of…

END_OF_DOCUMENT_TOKEN_TO_BE_REPLACED 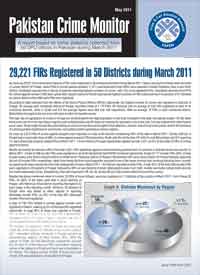 ISLAMABAD, June 27, 2011: As many as 29,221 First Information Reports (FIRs) were registered in 50 districts monitored by FAFEN during March 2011. According to FAFEN’s collection of crime statistics in 50 districts of the country for the month of March 2011, nearly one fourth (23%) of FIRs were recorded in Lahore district of Punjab.

END_OF_DOCUMENT_TOKEN_TO_BE_REPLACED 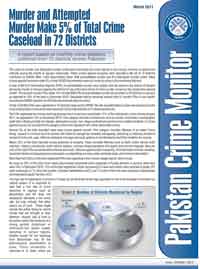 The cases of murder and attempted murder continued to dominate the crime figures in the country in terms of spread and intensity during the month of January nationwide. These crimes against humanity were reported in 66 out of 72 districts monitored by FAFEN. With 1,452 documented cases- 638 premeditated murder and 814 attempted murder cases-…

END_OF_DOCUMENT_TOKEN_TO_BE_REPLACED 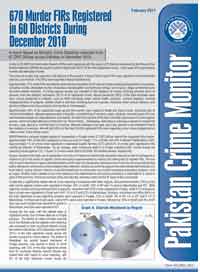 ISLAMABAD, March 8, 2011: A total of 23,439 First Information Reports (FIRs) were registered with the police in 67 districts monitored by the Free and Fair Election Network (FAFEN) during the month of December 2010. Of the total registered crimes, 1,422 cases (6%) pertained to murder and attempted murder, according to FAFEN’s monthly Pakistan Crime Monitor, the first report of which was released here Tuesday.

END_OF_DOCUMENT_TOKEN_TO_BE_REPLACED 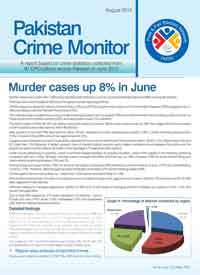 Murder Cases Up 8% in June

Murder cases went up 8% with 1,085 being reported in 85 districts in June as compared with May figures of 996 covering 80 districts. Peshawar (54) and Faisalabad (49) were the highest murder reporting districts. FAFEN observers visited 97 offices of District Police Officers (DPOs) to gather information on First Information Reports (FIRs) registered for…

END_OF_DOCUMENT_TOKEN_TO_BE_REPLACED
123
Prev page
Publication Categories
All rights reserved. Any part of the webpage may be produced or translated by duly acknowledging the source, all content is copyrighted © 2006-2020 Free & Fair Election Network