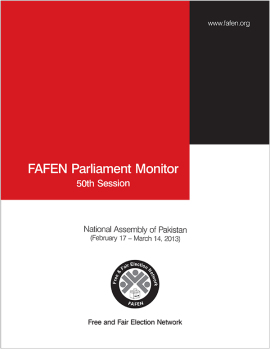 The 13th National Assembly, completing its historic five years tenure, achieved a legislative agenda which altered the country’s governance structure by ensuring provincial autonomy and restoring the 1973 constitution, and promoted women’s empowerment. However, the last session of the assembly was marked by low interest of members as low attendance persisted throughout the session, and the lower house left 70% of the agenda appearing on the Orders of the Day unaddressed. The 50th session witnessed the passage of bills on counter-terrorism, general elections, education and health. Maintaining the tradition of political consensus over legislation and other national interest issues, the house unanimously passed 15 bills, including two amendments to the Anti-terrorism Act to expand the powers of law enforcement agencies to tackle financing for acts of terrorism and empowering them to detain suspects for a period of thirty days. In addition, a bill was passed to set up the National Counter Terrorism Authority.

END_OF_DOCUMENT_TOKEN_TO_BE_REPLACED 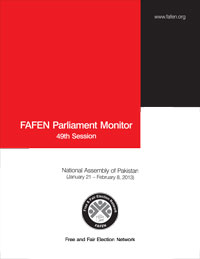 Islamabad, February 15, 2013: Marked by passage of four education-related bills amid walkouts on the imposition of Governor’s rule in Balochistan and the debate over creation of new provinces, the 49th session of National Assembly witnessed a historic change in the rules of procedure allowing standing committees power to scrutinize ministerial budgetary proposals before made…

END_OF_DOCUMENT_TOKEN_TO_BE_REPLACED 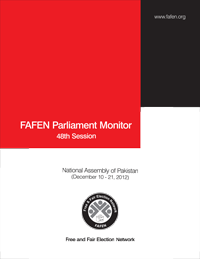 Islamabad, December 26, 2012: The 48th session of the National Assembly witnessed the passage of two treasury-backed bills as well as the Fair Trial Bill 2012 amid low members’ attendance, leaving 60% of the agenda appearing on the orders of the day unaddressed. The house passed three government bills and introduced eight, sending them to…

END_OF_DOCUMENT_TOKEN_TO_BE_REPLACED 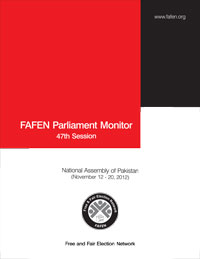 Islamabad, November 26, 2012: The 47th session of the National Assembly did not address 64% of the agenda items listed on the orders of the day as it witnessed low attendance, lack of quorum, late starts and excessive use of points of order interrupting the regular proceedings. However five bills were passed during the session,…

END_OF_DOCUMENT_TOKEN_TO_BE_REPLACED

Procedure for Election of Prime Minister in National Assembly

History was made when the government presented the fifth consecutive budget in the National Assembly becoming the first civilian government to do so. But the Prime Minister’s conviction in the contempt case and other political issues overshadowed and marred the budget session which also witnessed a brawl among legislators. Only 41 legislators (12% of the membership) took part…

END_OF_DOCUMENT_TOKEN_TO_BE_REPLACED
123456
Prev pageNext page
Publication Categories
All rights reserved. Any part of the webpage may be produced or translated by duly acknowledging the source, all content is copyrighted © 2006-2020 Free & Fair Election Network