ISLAMABAD, December 29, 2016: Leading civil society organizations in Pakistan have urged the government to initiate an inclusive consultative process on the issue of regulation of not-for-profit organizations instead of resorting to arbitrary measures to restrict their functioning and stifle their independence.

In a resolution adopted unanimously at the end of the consultation organized by the Free and Fair Election Network (FAFEN) to discuss the challenges being faced by civil society in Pakistan here on Thursday, the civil society organizations called for a unified law to replace more than 10 laws that currently are in vogue to govern the functioning of civil society in the country.

The resolution says, “The consultation believes that there already exist several government bodies and numerous laws to register and regulate functioning of Civil Society Organizations (CSOs). Therefore, it does not support the new measure by the Economic Affairs Division (EAD) to register national NGOs, who receive foreign funding on the grounds that this information is already being conveyed to government through other legally constitutional gover 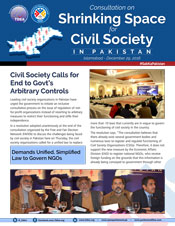 nment bodies. This measure is not only advisable but it is wrong and harmful.

“The consultation suggests that there should be a multi-lateral forum comprising relevant government ministries/bodies, funding agencies and national and international INGOs. The consultation also feels that all arbitrary harassment measures by the government or by the agencies against CSOs should be immediately stopped. The consultation demands unified and simplified mechanism to regulate CSOs with preferably one-window operation. The CSOs would welcome to enter into negotiation to agree on these issues.

“We reject the so-called business model of inclusion of for-profit and business firms because this is incompatible with the spirit of social works and movements of citizens and civil society and this would have huge negative impact on the growing Social Capital.”

I.A. Rehman, Secretary General Human Rights Commission of Pakistan, while speaking on “Creating Conducive Environment for Civil Society: Responsibilities of the State”, stated that the space is not only being shrunk for civil society but also for democracy, justice and fair play. He said the duty of civil society organizations is to ensure that people are properly governed, as non-state actors gets strength in case curbs are put on CSOs and rights of people. He said it is the responsibility of state to provide facilities to people for establishing trade unions to raise their voice against the injustices being meted out to them.

PATTAN National Coordinator Sarwar Bari explained that the civil society is not being provided space to operate freely, especially in southern Punjab, as some unknown persons come and ask to stop the ongoing activity despite the organizations are officially registered at concerned forums.

He quoted Article 38 of the Constitution that clearly provides the responsibilities of State towards its public and guarantees right for promotion of social and economic well-being of the people. He urged the not-for-profit organizations to get united against the policy of government to get NOC for every activity.

Mr. Shahid Fiaz, Chief Executive Officer-TDEA-FAFEN observed that space for civil society is gradually decreasing in Pakistan. He said the government is resorting to arbitrary decisions while dealing with CSOs. He said there is no framework for regulating a trust.

Muhammad Tahseen of SAP-PK said the business model to regulate funding of International donors is becoming a complex model to meet the criteria for CSOs. He said donors need to be negotiated to review their policies regarding introduction of business firms in various projects.

Naeem Mirza of Aurat Foundation said NGOs in Pakistan have done a lot in several fields to raise voice against gender-based violence which has not been recognized and the government must assist them in confronting various challenges.

Mr. Mubasher Saeed Saddozai, Director, Corporatization and Compliance Department, Security and Exchange Commission of Pakistan (SECP) said it is the mandate of Ministry of Interior at present to register INGOs. There are 70 to 80 thousand companies registered with SECP and only 850 NGOs are registered with SECP.

At the end of consultation, question answer session was held which was adequately answered by the panelists.