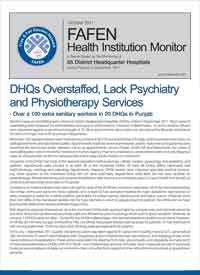 ISLAMABAD, November 18: A Free and Fair Election Network (FAFEN) monitoring report on Friday said several cases of overstaffing for administrative, support staff and other positions were observed in 55 District Headquarter Hospitals (DHQs) across Pakistan in September this year.

Out of the 55 DHQs, FAFEN Governance Monitors visited 22 in Punjab, 12 in Khyber Pakhtunkhwa, 11 in Balochistan, nine in Sindh and one in Kurram Agency.

It said in Balochistan 13 senior medical officers were appointed against a sanctioned strength of 12. Nine appointments were made over and above the 98 posts sanctioned for clerks in Punjab, four in KP and three in Balochistan.

More than 100 sanitary workers were hired (above a limit of 418) in 20 out of 22 DHQs in Punjab (which provided information on staff appointments and sanctioned posts).

Appointments made for senior storekeepers, peons, watchmen and gardeners also exceeded the sanctioned posts, between one to six appointments, across Punjab, Sindh, KP and Balochistan. No cases of overstaffing were noted in the DHQ monitored in Kurram Agency.

The report said a majority of the DHQs had most of the required specialist medical services – dental, surgery, gynecology and obstetrics, and pediatric departments were present in at least 48 of them. At least 46 DHQs nationwide had ophthalmology, radiology and pathology departments.

However, the report said DHQs lacked other important specialist medical services – three quarters did not have psychiatry departments while 60% were without facilities for physiotherapy.

Conditions of medical infrastructure were met well by most of the 55 DHQs monitored nationwide. All of the monitored facilities had X-Ray rooms and wards for indoor patients, and at least 52 had operation theatres for major operations, laboratories for tests, emergency wards for outdoor patients, generators for power backup, dental rooms and labour rooms.

However, more than half (56%) of the monitored facilities did not have kitchens in which to prepare food for patients. Six DHQs did not have blood banks while seven lacked ophthalmology rooms.

The report said all monitored DHQs were approachable by a proper road, and had both electricity and fans. All but two facilities had boundary walls and 49 were housed in buildings which were in good condition.

However, as many as 13 DHQs were not clean. Except for two DHQs in Balochistan, the rest had telephone landline connections. However, 24 DHQs did not have Sui gas connections. Fifty-one DHQs had proper shaded waiting areas for patients; 47 had washrooms with running water while 13 did not have clean drinking water arrangements for patients.

The report said in the July–September 2011 quarter, disciplinary action was taken against 91 personnel – medical (27), paramedical (36), technicians (7) and 21 administrative staff.

The disciplinary action involved warnings, terminations, and stoppage of pay, show cause notices and explanations. These actions were taken for absence from duty, unpunctuality, and irregularity. As many as 53 of these personnel were in DHQs in KP, 25 in Sindh, nine in Balochistan and four in Punjab.

FAFEN Governance Monitors interview up to three patients at each DHQ to assess the level of satisfaction with regard to presence and behavior of doctors and staff.

More than a quarter of 157 interviewed felt they had not been given enough time by doctors. Twenty-five were not satisfied with the behavior of doctors, while doctors’ absence was noted by 12 patients. Twenty-four per cent patients complained about the support and guidance offered by the support staff. Fifty-seven reported they did not get free medicines from the in-house pharmacy as per doctors’ prescriptions. Four patients in Punjab and one in KP reported demands for illegal money at the DHQs.