Disease Burden Down in August 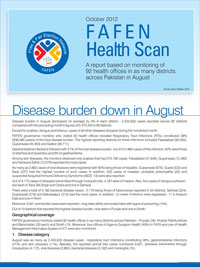 ISLAMABAD, November 16, 2012: Disease burden in August decreased on average by 3% in each district – 2,435,833 cases reported across 92 districts compared with the preceding month’s figures of 2,470,345 in 90 districts says a Free and Fair Election (FAFEN) report.

FAFEN governance monitors who visited 92 health offices revealed Respiratory Tract Infections (RTIs) constituted 38% (936,385 cases) of the total disease burden. The highest reporting districts for these infections included Faisalabad (94,505), Gujranwala (45,493) and Sialkot (39,711). Gastrointestinal infections followed with 21% of the total disease burden; out of 512,985 cases of this infection, 92% were those of diarrhea and dysentery and 8% of gastroenteritis.

Also, five cases of dengue surfaced – two each in Toba Tek Singh and Okara and one in Sahiwal. There were a total of 2,182 bacterial disease cases – 2,170 being those of tuberculosis reported in 34 districts. Sahiwal (224), Gujranwala (219) and Bahawalpur (213) had the most cases. In addition, 12 cases of tetanus were registered – 11 in Karachi East and one in Kech. Moreover, 9,821 animal bite cases were reported – dog bites (90%) and snake bites with signs of poisoning (10%). Out of 10 districts that reported the highest disease burden, nine were in Punjab and one in Sindh.