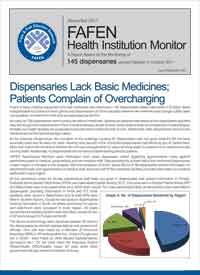 ISLAMABAD, December 14, 2011: A Free and Fair Election Network (FAFEN) report on Wednesday said basic medical equipment and free medicines were not available in 145 dispensaries visited nationwide in October this year.

The report said items indispensable for protection from germs and transmission of communicable diseases like sterilizers and syringe cutters were not available, nor were free medicines prescribed by doctors. As many as 126 dispensaries were found to be without medicines.

FAFEN Governance Monitors visited 68 dispensaries in Punjab, 36 in Sindh, 26 in Khyber Pakhtunkhwa, 11 in Balochistan, one in Islamabad Capital Territory (ICT) and three in the Federally Administered Tribal Areas (FATA).

Seventy-six patients interviewed at the dispensaries reported they did not get free medicines from the in-house pharmacy as per doctors’ prescriptions while 32 complained of overcharging. All state-run health facilities are supposed to provide these medicines free of cost.

Additionally, 65% dispensaries did not have sterilizers and a third lacked syringe cutters.

The report said the condition of buildings housing 67 dispensaries was not good while 43 did not have boundary walls and 30 were not clean. Seventy-nine percent of the monitored dispensaries had electricity but 37 lacked fans.

FAFEN monitors seek information from every dispensary visited about appointments made against sanctioned posts of medical, paramedical and non-medical staff.

All the sanctioned posts for female paramedical staff were occupied in dispensaries that shared information in Punjab, FATA and ICT. One post each in KP and Balochistan was unoccupied while six in Sindh were vacant.

For male paramedical staff, all sanctioned posts were filled in dispensaries providing information in FATA and ICT, three positions were vacant in Balochistan and at least 90% were filled in all other regions. Except for two posts in dispensaries sharing information in Sindh, all others sanctioned for peons and watchmen were occupied in every region. All posts sanctioned for sanitary workers were also filled, except for two in KP and one each in Punjab and Sindh. The report said 78 visits were made to the monitored dispensaries by elected representatives and government officials.