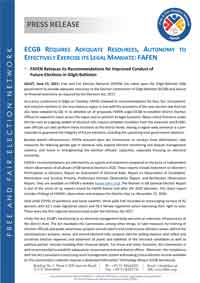 GILGIT, June 15, 2021: Free and Fair Election Network (FAFEN) has called upon the Gilgit-Baltistan (GB) government to provide adequate resources to the Election Commission of Gilgit Baltistan (ECGB) and ensure its financial autonomy as required by the Elections Act, 2017.

At a press conference in Gilgit on Tuesday, FAFEN released its recommendations for free, fair, transparent, and inclusive elections in the mountainous region in line with the provisions of the new election law that has also been adapted by GB. In its detailed set of proposals, FAFEN urged ECGB to establish District Election Offices to expand its reach across the region and to perform its legal functions. Many critical functions under the law such as ongoing update of electoral rolls require complete insulation from the executive and ECGB’s own officials can best perform these functions at the district levels. Having a region-wide presence is a pre-requisite to guarantee the integrity of future elections, including the upcoming local government elections.

FAFEN’s recommendations are informed by six reports and statements prepared on the basis of independent citizen observation of all phases of GB General Elections 2020. These reports include Statement on Women’s Participation in Elections, Report on Assessment of Electoral Rolls, Report on Observation of Candidates’ Nomination and Scrutiny Process, Preliminary Election Observation Report, and By-Election Observation Report. They are available on FAFEN’s website (www.fafen.org). The Women in GB General Election Report is last of the series of six reports issued by FAFEN before and after the 2020 elections. This latest report includes findings of FAFEN’s observation and analyses the Election Day i.e. November 15, 2020.

Under the Act, ECGB’s functioning as an electoral management body warrants an extensive infrastructure at the district level. The Act mandates the Commission, among other things, to take measures for training of election officials and public awareness; prepare annual reports and conduct post-election review; delimit the constituencies; prepare, revise, and amend electoral rolls; propose sites for polling stations; and collect and scrutinize election expenses and statement of assets and liabilities of the returned candidates as well as political parties’ records including their financial details. For these and other functions, the Commission is well recommended to establish adequately-resourced central and district offices.  Moreover, the compliance with the Act’s provisions concerning result management system and making critical election records available on the Commission’s website requires a dedicated Information Technology Wing in ECGB Secretariat.

ECGB can make appointments, and sanction budget for these establishments using its powers as defined in sections 6 and 11(2) of the Elections Act 2017. These sections authorize the Chief Election Commissioner (CEC) to exercise powers relating to the appointment of officers and staff to be employed in connection with the Commission’s functions, and the financial powers to sanction and incur expenditure within the approved budgetary allocation including creation of posts.

To bridge the widening gender gap on electoral rolls, ECGB needs to take a leading role in coordinating among the key stakeholders such as NADRA and civil society, and launch a campaign for NIC and voter registration, especially for women, to ensure that all eligible citizens are enrolled as voters.

FAFEN also urges ECGB to review the large voter disparities in existing constituencies and conduct the delimitation exercise afresh using the recent population census while complying with the principles for delimitation described in the Elections Act, 2017. Moreover, expanding its present capacity to monitor the electoral activities and events will also serve ECGB well in implementing the Elections Act in its letter and spirit.

The Commission may also develop an online case management system to document and track disputes and cases decided by or pending before the ROs, Commission and Tribunals. Efficient disposal of election disputes is critical to inspire confidence of citizens and political parties in the election process. In this regard, ECGB may develop effective collaboration with the Election Commission of Pakistan (ECP), which is also taking similar initiatives under its recent Strategic Plan 2019-2023.

NA session prorogued amid lack of quorum
ISLAMABAD, October 22, 2021: The National Assembly left most of its agenda unaddressed and was prorogued sine die on Friday amidst lack of quorum, observes…