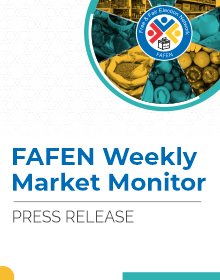 ISLAMABAD, May 06, 2020: As the country enters second month of lockdown, the enforcement of the officially notified prices of essential commodities suffers across the country due to weak market monitoring mechanisms and unavailability of official rate lists. During the first week of Ramzan, many essential items were sold in the wholesale markets above the officially notified prices, says the Free and Fair Election Network’s (FAFEN) Weekly Market Monitor.

The current Weekly Market Monitor comprises the market survey conducted in 41 districts – 18 in Punjab, seven in Khyber Pakhtunkhwa, 10 in Sindh, and six in Balochistan on Thursday, April 30, 2020.

The unavailability of the officially notified prices of the essential items continued to adversely impact the administrations’ efforts to ensure the availability of these items to public at affordable rates. Meat, poultry, and other essential groceries’ official rates were not easily accessible for the public in various districts across the country.  Over a third (36 percent) of the 41 districts did not have sugar prices publicly available. The official prices of wheat were not available in around a quarter (27 percent) of the districts. The official prices of pulses were missing in nearly one fifth (19 percent) of the districts and of milk in 14 percent of the districts. Nevertheless, vegetable prices were generally available except five percent of the observed markets.

The enforcement of the official market prices varied greatly across the districts. Among the routine vegetables, the tomatoes’ market prices were higher than the official prices in 44 percent districts, Tomatoes – one of the cheapest vegetables during pre-Ramzan week – were overpriced by Rs. 60 in the case of a market in Jacobabad. Onions and potatoes were overpriced in 37 percent and 25 percent markets, respectively. The highest difference in onion prices was recorded Rs. 22 in Lahore while the potatoes prices were observed to be up by Rs. 30 in Gujrat.

In the pulses, Daal Masoor was sold at higher prices than official in nearly half of the districts. The difference between its official and market prices was highest, Rs. 120, in Mardan. Similarly, Daal Channa, Mash and Mong were sold above official rates in 18, 12, and 11 districts, respectively. Maash and Mong were sold Rs. 146 and Rs. 140 above the market prices in Karachi.

Similarly, refined sugar and wheat flour were sold above official rates in 36 percent and 32 percent districts, respectively. A 20 kilogram wheat flour bag was sold Rs. 280 above the official price in Killa Abdullah. Similarly, refined sugar was being sold at Rs. 18 above the market price in Karachi East.  Chicken and eggs were overpriced in 32 percent of the districts. The highest difference between market and official prices of the chicken was noted Rs. 40 in Dera Bugti. Mutton and beef were also overpriced in nearly 45 percent of the observed districts. The mutton prices were up by Rs. 460 and beef prices by Rs. 300 in various markets of Karachi.

Realizing the need for an independent and regular assessment of the availability of essential commodities across the country, TDEA-FAFEN is generating the weekly market monitors covering 15 essential kitchen items including basic groceries such as wheat, pulses, oil, sugar and perishable commodities such as meat, and vegetables. The official prices were taken from the district administration, or market committees while the wholesale prices were gathered through the market surveys. In the case of Punjab, the government price app “Qeemat Punjab” was also used to fetch the officially notified price.