Gastrointestinal Infections and Scabies Widespread During May 2011 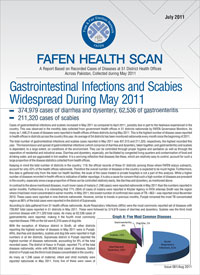 ISLAMABAD, August 21: More than 1.4 million cases of diseases, including widespread instances of gastrointestinal infections and scabies, were reported in 51 districts nationwide in May this year, according to a FAFEN monitoring report released on Sunday.

The total number of gastrointestinal infections and scabies cases reported was 437,515 and 211,320 respectively, the highest recorded this year.  Like previous months, health offices in Punjab reported more diseases mainly because of higher population and greater outreach.

The report said diarrhea, dysentery, gastroenteritis, and scabies can be controlled through proper hygiene and sanitation. But it added worryingly relatively easy to control diseases account for such a large proportion of the disease statistics collected from health offices.

Out of the total 119 districts in the country, the official record of these 51 districts accounts for only 43% of the health offices nationwide. “Therefore the overall number of diseases in the country is expected to be much higher. Furthermore, this data is gathered only from the state-run health facilities; the scale of the cases treated in private hospitals is not a part of this analysis.”

FAFEN Governance Monitors have received disease statistics from 51 health offices nationwide. Twenty-two Executive District Officer/Health (EDO/Health) offices in Punjab, 12 in Sindh, eight in Khyber Pakhtunkhwa and six in Balochistan shared information, as well as the office of the Agency Surgeon Health (ASH) in FATA and the Health Management Information System (HMIS) in the Islamabad Capital Territory.