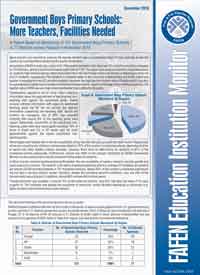 ISLAMABAD, January 14, 2011: More teachers are required to improve the teacher-student ratio in Government Boys Primary Schools across the country as a prerequisite to enhancing the quality of education, says FAFEN’s Education Institution Monitor released here Friday.

According to FAFEN monitoring of 121 Government Boys Primary Schools in 77 districts conducted during November 2010, an average of one teacher is available for every 35 enrolled students in the monitored institutions. FAFEN monitoring covered 52 schools in 29 districts of Punjab, 27 in 18 districts of Khyber Pakhtoonkhwa (KP), 32 in 21 districts of Sindh, eight in seven districts of Balochistan and two in two agencies of Federally Administered Tribal Area (FATA).

According to FAFEN monitoring, a total of 25,794 enrolled students in the observed 121 schools were being managed by 743 teachers, giving a nationwide teacher-pupil ratio of 1:35. The region wise analysis presents a disparate picture as relatively high student-teacher ratios were observed in KP and Punjab where one teacher is attending to every 44 and 37 students, respectively. The situation is relatively better in the provinces of Balochistan and Sindh where one teacher is available for every 27 enrolled students. However, the high teacher-student ratio in Punjab and KP may also be representing a higher level of student enrollment in those regions. Based on the data of two monitored schools, the teacher-ratio in FATA was very high where one teacher has to attend to 84 pupils.

Percentages were notably low in terms of availability of key facilities like playgrounds and staff rooms. Playgrounds which are a must for any children’s school were absent in 70% of the country’s monitored schools, depriving children of sports and other healthy outdoor activities. Likewise, there were no staff-rooms for teachers in 87% of the monitored schools nationwide. Furthermore, almost two-fifths of the schools monitored by FAFEN Governance Monitors in the country had no facility of clean drinking water for students.

In Boys’ primary schools monitored during November, the non-availability of sanitary workers, security guards and peons was also a concern. The need for such staff is important, especially where on average 213 students are enrolled per school (25794 enrolled students in 121 monitored schools). Nearly 92% of the country’s monitored institutions did not have a serving sanitary worker. Similarly, despite the prevailing security conditions, only one-fifth of the schools had a security guard. In addition, almost 60% schools did not have peons.

Though electricity was available in around 75% of the observed schools, only 64% had fans and nearly 71% were properly lit. This indicates that despite the availability of electricity, certain facilities depending on electricity (e.g. lights and fans) were not ensured in some schools.