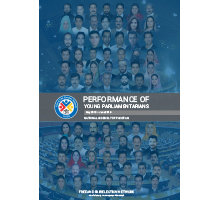 In connection with the International Youth Day, the Free and Fair Election Network (FAFEN) released a report on the performance of 78 members of Youth Parliamentarians Forum (YPF) of the National Assembly between May 2013 and June 2016. The forum was established in 2003 and comprises MNAs aged 40 or below at the time of their election. The Forum provides young parliamentarians with a platform to share and develop ideas, improve legislative and leadership skills, and form inter-regional and inter-party networks.

Young lawmakers belonging to MQM remained most active as they introduced 26 private member’s bills, submitted 27 resolutions, proposed 11 amendments to Rules of Procedures, asked 823 questions, sponsored 18 Motions under Rule 259 and raised 35 CANs. Of the entire agenda sponsored by young parliamentarians, 32% was submitted by members of MQM, followed by PPPP (23%), PML-N (14%), PTI (8%), JUI-F (3%), independents (2%) and NPP (1%). As much as 17% agenda was jointly sponsored by young members from various parliamentary parties. Four young lawmakers of PML-N did not participate in the proceedings throughout three parliamentary years.

The National Assembly met in 306 regular sittings while both Houses had 23 joint sittings, adding to a total of 329 sittings during three parliamentary years. On an average, every young lawmaker attended 185 sittings (56%) with Aliya Kamran – a JUI-F member from Balochistan – being the most punctual by attending 327 (99%) sittings and Hamza Shehbaz Sharif of PML-N being the least regular as he appeared in 30 (9%) sittings. Hamza’s contribution to the parliamentary business was limited to one Point of Order in three parliamentary years spanning over 33 sessions.

A total of 20 YPF members attended less than half of the total sittings. Of the 78 members, 58 (74%) were elected for the first time and their average age is 36 years while seven age below 30. Thirty-one young members are agriculturists, 13 businessmen, 7 in private service, 6 housewives and other associated with other professions.

FAFEN analyzed the on-floor participation of the members of YPF by directly observing parliamentary proceedings of the National Assembly. The report includes performance records of lawmakers from the first to 33rd session held during three parliamentary years and their participation in legislative, oversight and representative functions of the House.