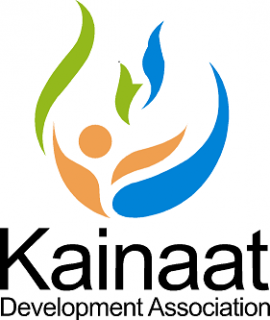 Kainaat Development Association (KDA) is a development focused organization with expertise in advocacy, lobbing and human development response. Registered and operational since 2001, its vision and mission is to improve social development indicators of rural areas of Sindh. The organization has an independent board of governance comprising eight members having diverse academic, professional and social background coming from public and private sectors. Over the past 15 years, the organization has gone through different stages of maturity and has evolved as the leading organization of North Sindh in last three years.

With its head office in Kandhkot, Kainaat is targeting more than two million population in nine districts of North Sindh i.e. District Jacobabad, Kashmore, Shikarpur, Qamber-Shahdadkot, Larkana, Dadu, Ghotki, Khairpur and Sukkur. Kainaat works in partnership with relevant stakeholders, including the relevant line departments, multi-lateral and bi-lateral donors, INGOs, National Support Organizations and most importantly local NGOs and CBOs. Kainaat is part of several district, regional and national level networks and has partnership with hundreds of CBOs in all the nine districts of the Upper Sindh.