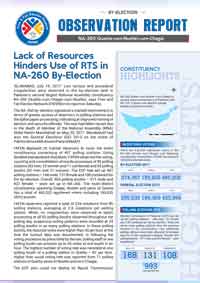 The NA-260 by-election registered a marked improvement in terms of greater access of observers to polling stations and the ballot paper processing, indicating at improved training of election and security officials. The seat had fallen vacant due to the death of Member of the National Assembly (MNA) Abdul Rahim Mandokhail on May 20, 2017. Mandokhail had won the General Elections (GE) 2013 on the ticket of Pakhtunkhwa Milli Awami Party (PkMAP)

FAFEN deployed 25 trained observers to cover the entire constituency comprising of 407 polling stations. Using detailed standardized checklists, FAFEN observed the voting, counting and consolidation of results processes at 85 polling stations (52 men, 22 women and 11 combined) and 93 polling booths (62 men and 31 women). The ECP had set up 407 polling stations – 168 male, 131 female and 108 combined for the by-election. Overall, 993 polling booths – 571 male and 422 female – were set up in NA-260. The multi-district constituency spanning Chagai, Nushki and parts of Quetta has a total of 460,202 registered voters including 185,835 (40%) women.

The ECP also could not deploy its Result Transmission System (RTS) in the by-election for NA-260, an innovative solution for efficient and transparent management of election results. Under this system, the Presiding Officers are required to send a picture of Statement of Count (Form-XIV) as soon as the result at a polling station is finalized directly to the ECP through a dedicated mobile application, which also records the time and location of the result transmission. Developed by ECP, the system was successfully used in the recently held by-election for PS-114 in Karachi and some earlier elections.

According to ECP officials, the RTS could not be used in NA-260 due to lack of resources. The federal government has yet to allocate funds that the ECP has requested for the conduct of next general elections, impeding its preparations particularly the use of technology that has been planned to improve the quality of elections as well as the result management.

According to FAFEN estimates, the overall turnout of NA-260 by-election remained 30.2 percent – 30.4 percent male turnout and 29.5 percent for women. During the 2013 GE, NA-260 registered a record turnout of 41 percent, while was observed to have drastically decreased during this by-election. The following figure illustrates the estimated turnout by gender:

The presiding officers at five polling stations told observers that they had not received ECP’s training. As many as 58 out of 85 presiding officers interviewed reported to have performed election duties in the past. According to observers, ECP monitoring teams and designated officials visited at least 36 polling stations and checked various aspects of the polling process including election security, voting and others.

FAFEN observed the opening processes at 24 polling stations. The election staff was present and prepared to start the polling process by 8:00am except at one place where ballot books were not available at 8:00 am. The critical election forms i.e. copies of Form XIV and Ballot Paper Account (Form XV) did not match the number of candidates at 10 and 17 polling stations, respectively. The observers also reported absence of female staff at eight polling booths designated for women voters while at six such polling booths, male staff were also observed present alongside female staff.