Lawmakers to Collaborate for Legislative Reforms in Punjab Assembly

LAHORE, January 27, 2017: Members of the Legislative Support Group (LSG), comprising lawmakers of the Punjab Assembly, vowed to collaborate with each other on proposed reforms in the Rules of Procedure. They further resolved to support the proposed amendments to the Rules in the concerned Committee as well as in the House when brought for consideration.

The LSG held its second meeting on Thursday which was attended by 28 lawmakers, including Leader of the Opposition Mian Mahmood-ur-Rasheed and members of PML-N, PTI, PPPP and JI. From amongst the amendments proposed by Free and Fair Election Network (FAFEN), more than 16 amendments to the Punjab Assembly Rules of Procedure and Conduct of Business have already been submitted to the Assembly Secretariat by lawmakers belonging to PML-N and PTI. These amendments are now pending for review with the Special Committee No. 7 which comprises 13 members of various parties represented in the Provincial Assembly. 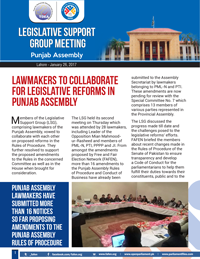 The LSG discussed the progress made till date and the challenges posed to the legislative reforms’ efforts. FAFEN briefed the members about recent changes made in the Rules of Procedure of the Senate of Pakistan to ensure transparency and develop a Code of Conduct for the parliamentarians to help them fulfill their duties towards their constituents, public and to the Parliament.

PTI provincial lawmaker Mian Muhammad Aslam Iqbal said that reforms in the Rules of Procedure were urgently needed to restore the public confidence on the elected representatives and the Assembly. He invited the members on government benches to join hands with their opposition colleagues to bring necessary amendments to the Rules of Procedure and Conduct of Business.

PML-N legislator Ayesha Javed appreciated FAFEN’s initiative to form a representative group of lawmakers for bringing out reforms in Assembly procedures. Speaking on the issue of delegated legislation, the lawmaker said a committee of the Assembly should review the rules, bylaws and statutes framed by the government departments using powers delegated to them under Acts of the Assembly.

Independent lawmaker Ehsan Riaz Fatyana said that the use of discretionary powers of the Speaker regarding admissibility of lawmakers’ agenda should be subject to review by the Assembly. He also proposed to enforce compulsion on the government to inform the Assembly about implementation on its resolution in retrospective effect so that the will of the public may be implemented in true sense.

The minority lawmaker Shehzad Munshi appreciated the formation of Legislative Support Group and advised the members to rise above their party affiliations on matters of public interest and parliamentary supremacy. He was of the opinion that minorities’ business in the Assembly suffers due to disinterest of the treasury as well as opposition. Jamaat-e-Islami lawmaker Syed Waseem Akhtar suggested improving the working of the Public Accounts Committee to make executive accountable to the Assembly.

Established in October last year, the LSG comprises lawmakers belonging to all parties represented in the Punjab Assembly and is supported by Trust for Democratic Education and Accountability-Free and Fair Election Network (TDEA-FAFEN).

END_OF_DOCUMENT_TOKEN_TO_BE_REPLACED

Punjab Assembly fails to transact agenda amid lack of quorum
ISLAMABAD, August 9, 2021: The Provincial Assembly of Punjab left its entire agenda unaddressed on Monday and was adjourned due to lack of quorum, observes…