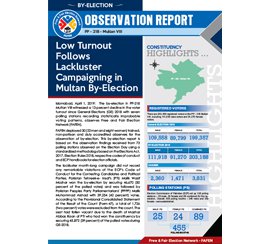 FAFEN deployed 30 (22 men and eight women) trained, non-partisan and duly accredited observers for the observation of by-election. This by-election report is based on the observation findings received from 73 polling stations observed on the Election Day using a standardized methodology based on the Elections Act, 2017, Election Rules 2018, respective codes of conduct and ECP handbooks for election officials.

The lackluster month-long campaign did not record any remarkable violations of the ECP’s Code of Conduct for the Contesting Candidates and Political Parties. Pakistan Tehreek-e- Insaf’s (PTI) Malik Wasif Mazhar won the by-election by securing 46,670 (50 percent of the polled votes) and was followed by Pakistan Peoples Party Parliamentarians’ (PPPP) Malik Muhammad Arshad with 39,254 (42 percent) votes. According to the Provisional Consolidated Statement of the Result of the Count (Form-47), a total of 1,726 (two percent) votes were excluded from the count. The seat had fallen vacant due to the death of Mazhar Abbas Raan of PTI who had won the constituency by securing 45,872 (39 percent) of the polled votes during GE-2018.