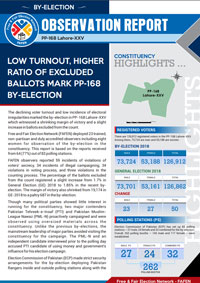 ISLAMABAD, December 14, 2018: The declining voter turnout and low incidence of electoral irregularities mark the by-election in PP-168 Lahore-XXV which witnessed a shrinking margin of victory and a slight increase in ballots excluded from the count.

Free and Fair Election Network (FAFEN) deployed 23 trained, non-partisan and duly accredited observers including eight women for observation of the by-election in the constituency. This report is based on the reports received from 64 (77%) out of 83 polling stations.

FAFEN observers reported 59 incidents of violations of voters’ secrecy, 34 incidents of illegal campaigning, 34 violations in voting process, and three violations in the counting process. The percentage of the ballots excluded from the count registered a slight increase from 1.7% in General Election (GE) 2018 to 1.85% in the recent by-election. The margin of victory also shrinked from 19,174 in GE-2018 to a paltry 687 in the by-election.

Though many political parties showed little interest in running for the constituency, two major contenders Pakistan Tehreek-e-Insaf (PTI) and Pakistan Muslim-League Nawaz (PML-N) proactively campaigned and were observed using oversized materials across the constituency. Unlike the previous by-elections, the mainstream leadership of major parties avoided visiting the constituency for the campaign. The PML-N and an independent candidate interviewed prior to the polling day accused PTI candidate of using money and government’s influence for his election campaign.

Election Commission of Pakistan (ECP) made strict security arrangements for the by-election deploying Pakistan Rangers inside and outside polling stations along with the Punjab Police. Moreover, a contingent of Pakistan Army was also put on stand-by to handle any untoward incident in the constituency which fortunately did not take place.

PML-N leader Khawaja Saad Rafique had earlier won this seat in the General Elections 2018, and later vacated it after being elected to the National Assembly (NA) in the by-election held on October 14, 2018. Mr Rafique had secured 34,119, or 53% of the total polled votes in GE-2018 while PTI’s candidate Fiaz Hussain Bhatti received 14,950 (23%) votes. Tehreek-e-Labbaik Pakistan (TLP) had won around 15% of the polled votes in GE-2018.

TDEA-FAFEN Provides Evidence to Reject Allegations of Expelled Member
Islamabad, November 24, 2021: The Free and Fair Election Network (FAFEN) has categorically rejected the barrage of allegations, slander and insinuations being levelled by its…