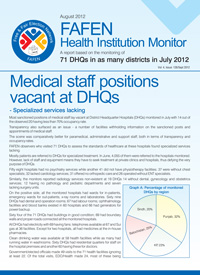 ISLAMABAD, September 26, 2012: Most sanctioned positions of medical staff lay vacant at District Headquarter Hospitals (DHQs) monitored in July with 14 out of the observed 20 having less than 70% occupancy rate, says a Free and Fair Election Network (FAFEN) report.

FAFEN observers who visited 71 DHQs in as many districts to assess the standards of healthcare at these hospitals were denied information on the sanctioned and appointed posts of medical staff at a number of health facilities.

The scene was comparatively better for paramedical, administrative and support staff, both in terms of transparency and occupancy rates.

Monitoring further revealed the absence of specialized services at the health facilities.

Mostly patients are referred to DHQs for specialized treatment. In June, 4,055 of them were referred to the hospitals monitored. However, lack of staff and equipment means they have to seek treatment at private clinics and hospitals, thus defying the very purpose of DHQs.

Fifty eight hospitals had no psychiatry services while another 41 did not have physiotherapy facilities; 37 were without chest specialists; 32 lacked cardiology services; 31 offered no orthopedic care and 26 operated without ENT specialists.

Similarly, the monitors reported radiology services non-existent at 19 DHQs 14 without dental, gynecology and obstetrics services; 12 having no pathology and pediatric departments and seven lacking surgery units.

On the positive side, all the monitored hospitals had wards for in-patients, emergency wards for out-patients and x-ray rooms and laboratories. Sixty nine DHQs had dental and operation rooms; 67 had labour rooms; ophthalmology facilities and blood banks existed in 60 hospitals and 66 had generators for power backup.

Sixty four of the 71 DHQs had buildings in good condition; 69 had boundary walls and proper roads connected all the monitored hospitals.

All DHQs had electricity with 69 having fans; telephones available at 67 and Sui gas at 36 facilities. Except for two hospitals, all had medicines at the in-house pharmacies.

Clean drinking water was available at 58 health facilities while as many had running water in washrooms. Sixty DHQs had residential quarters for staff on the hospital premises and another 60 having these for doctors.

Government/elected officials made 49 visits to the 71 health facilities ignoring at least 22. Of the total visits, EDO/Health made 24, most of these being supervisory/general visits, some others routine visits and a few meant to assess the quality of health services. MPAs made six visits and MNAs four while 15 visits were by some other government officials.