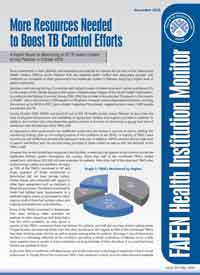 ISLAMABAD, December 8, 2010: More investments in basic facilities and equipment are essential to improve the services at the Tuberculosis Health Centers (TBHCs) across Pakistan that are relatively better staffed and adequately stocked with medicines as compared to other government-run healthcare outlets in Pakistan, thus enjoying a higher level of patient satisfaction, according to FAFEN’s monthly Health Institution Monitor released here Wednesday.

During October 2010, FAFEN monitored 62 out of 293 TB Health Centers across Pakistan to document the state of physical infrastructure and availability of equipment, facilities and support provided to patients. In addition, the monitors also interviewed the patients present at the time of monitoring to gauge their level of satisfaction with the behavior of the TBHC staff. FAFEN Governance Monitors visited 62 TB Centers in 49 districts across Pakistan; 21 Centers in 15 districts of Punjab, 20 Centers in 17 districts of KP, 17 Centers in 13 districts of Sindh and 4 Centers in as many districts of Balochistan.

Pakistan is sixth among the top 22 countries with highest burden of tuberculosis and it alone contributes 43% to the burden of this deadly disease in the Eastern-Mediterranean Region of the World Health Organization. According to the Pakistan Economic Survey 2009-2010, the number of documented TB patients in the country is 76,668 – one in almost every 2,000 people is a TB patient. However, some independent estimates, including the one put up by WHO in 2007, give a bleaker mapping of the disease, suggesting two in every 1,000 people are infected with TB.

As opposed to other government-run healthcare outlets that are lacking in services as well as staffing, the monitoring findings gave an encouraging picture of the conditions at the TBHCs. A majority of TBHCs were found to be well staffed and stocked with adequate medicines. In addition, FAFEN monitors found a high level of patient satisfaction with the services being provided at these centers as well as with the behavior of the TBHCs’ staff.

However, the centers lacked basic equipment and facilities, a weakness that appears to be common across the healthcare delivery system throughout the country. More than half of the monitored TBHCs lacked wheelchairs, and about 41% did not have stretchers for patients. More than half of the observed TBHCs also lacked syringe cutters and sterilizers. As many as 79% of the TBHCs monitored in KP and three quarters of those monitored in Balochistan did not have syringe cutters. Similar trends were observed with regard to other basic equipment such as sterilizers in these two provinces. The centers monitored in Sindh had fulfilled basic requirements to a relatively higher extent as compared to other regions, as all of them had syringe cutters, and majority had wheelchairs and stretchers.

None of the TBHCs monitored in Balochistan had clean drinking water for patients, only a quarter had latrines, and half did not have proper waiting areas. The situation was better in Punjab as 89% of the monitored centers had all the above facilities. It is imperative that these facilities be available, since people stay at these centers for long stretches of time on a daily basis.

No shortage of medicines in in-house pharmacies was reported except in Punjab, where 5% monitored facilities had not medicines, and free medicines were unavailable to the same percentage of patients.

Lack of transparency was seen as 18 out of 62 TBHCs did not provide information about sanctioned staff posts. For those that did, there were high occupancy rates for doctors and paramedics. All posts for doctors were filled in Balochistan and Sindh, 95% in Punjab, and 80% in KP, and shortfall in occupancy rates occurred due to vacant status of male doctors’ posts. High occupancy rates were observed for paramedics in TBHCs monitored in Punjab (98%), KP (95%), and Sindh (82%). In Balochistan, interestingly, a 133% occupancy rate was reported, which points towards overstaffing. All the sanctioned posts for nurses were filled in both KP, and Sindh, while the percentage was much lower in Punjab (61%). No posts for nurses were sanctioned in the TBHCs monitored in Balochistan.

END_OF_DOCUMENT_TOKEN_TO_BE_REPLACED

National Dialogue for Social and Political Consensus, demands FAFEN
ISLAMABAD, January 19, 2018: All democratic forces must initiate a grand national dialogue to reverse the dangerous trends of negativism, polarization and obscurantism. These trends…

END_OF_DOCUMENT_TOKEN_TO_BE_REPLACED

Press Releases Categories
All rights reserved. Any part of the webpage may be produced or translated by duly acknowledging the source, all content is copyrighted © 2006-2019 Free & Fair Election Network