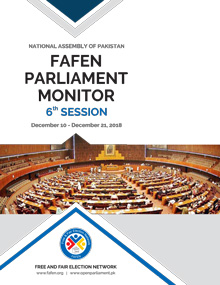 ISLAMABAD, December 22, 2018:  The National Assembly did not address around 59 percent of its scheduled business and consumed 36 percent of the proceedings on Points of Order during sixth session that ended on December 21, 2018.

The Leader of the House (Prime Minister) did not attend any sitting during the session. The Leader of the Opposition was present in every sitting; however, he stayed in the House for 37 percent of the proceedings (three hours and 42 minutes).

The average maximum attendance per sitting was recorded 239 (70 percent) while FAFEN’s headcounts indicate that 65 (19 percent) lawmakers, on an average, were present at the commencement and 87 (25 percent) at the adjournment of each sitting, respectively. The instances of identification of quorum also saw a decline as compared to previous session as only one sitting faced the question of quorum which was found complete on the headcount. On the other hand, a sitting had to be adjourned an another suspended due to lack of quorum during previous session.