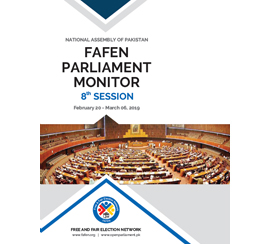 ISLAMABAD, March 8, 2019: The National Assembly did not address 38 percent of the agenda during eighth session that continued between February 20 and March 6, 2019. The House spent seven hours and 55 minutes (62 percent) on various Points of Order (POs) while debating the Indian violation of Pakistani airspace, arrest of the Sindh Assembly Speaker and political and other issues. The proceedings remained suspended for three hours and 36 minutes (22 percent) due to the protests, prayers breaks and lack of quorum.

The House passed two bills including the Finance Supplementary (Second Amendment) Bill, 2019 while one bill was referred to the relevant committee. The House did not witness order in the House during the passage of Money Bill as only 22 minutes were consumed to pass the bill.  Moreover, a Motion under Rule 259, two CANs remained unaddressed while the Question Hour in first two regular sittings, debate on Senate recommendations on the Money Bill and a Motion of Thanks were also skipped.

The National Assembly did not observe punctuality during the session as none of the sittings were started on time. The maximum delay of three hours and 26 minutes was witnessed during seventh sitting while two hours and 32 minutes during the first sitting. The minimum delay of 18 minutes was witnessed during third and sixth sittings. The seventh sitting was the shortest one that continued for just seven minutes, whereas the fifth sitting was the longest that continued for four hours and 55 minutes.