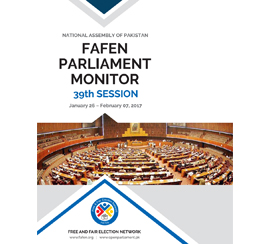 The House did not address a quarter of its agenda during the session. The left-over agenda included the Private Members’ interventions on issues of public importance. The majority of Calling Attention Notices were addressed but the Motions under Rule 259 were not taken up for discussions. No adjournment motion could become part of the business due to the presence of Motion of Thanks to the President on Orders of the Day. The Motion of Thanks is pending on the agenda since July 2016 and was not discussed even once during the session.

The session also witnessed scuffle between members of the ruling PML-N and opposition party PTI. The following sitting after the incident was adjourned without taking up any agenda. Moreover, lawmakers also staged six walkouts to record their protest over various issues, including increase in electricity tariff, absence of ministers and attack on PPPP leader Shaukat Basra.

END_OF_DOCUMENT_TOKEN_TO_BE_REPLACED

NA transacts most of agenda, consumes 75% of sitting time on points of order
ISLAMABAD, April 16, 2021: The National Assembly (NA) transacted most of its agenda and consumed 75 percent of the proceedings in points of order related…