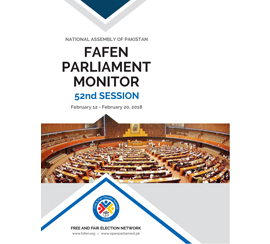 ISLAMABAD, February 20, 2018: The National Assembly transacted 83% of the scheduled business during its 52nd session that continued between February 12, 2018 and February 20, 2018, observes Free and Fair Election Network in its session report based on direct observation of the House proceedings.

The House approved the important legislation on the rights of children, health sector reforms and technical education. The approved legislation also included private members’ bills regarding regulation of recruitment in government departments and the National Assembly Secretariat, formation of a regulatory authority for courier and logistical services and amendments in the criminal laws.

The seven-sitting session spanned over 20 hours and 36 minutes. Each sitting, on average, continued for two hours and 56 minutes. The Prime Minister was observed to be present during one sitting only for an hour and 13 minutes (six percent of the proceedings), while the Leader of the Opposition attended four out of seven sittings and remained present for four hours and 54 minutes (24% of the proceedings).

According to official attendance records, 179 (52%) lawmakers attended each sitting on an average. The highest attendance – 221 members present – was recorded during the last sitting while the lowest attendance – 124 members present – was witnessed during the fifth sitting. As per the headcount conducted by FAFEN at the commencement and conclusion of the sittings, on average 27 lawmakers were present at the start and 46 at the adjournment of each sitting. Out of eight minority lawmakers, on average, five were present during each sitting. As many as two sittings of the session were adjourned due to lack of quorum.