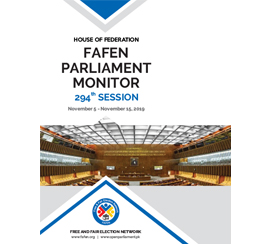 ISLAMABAD, November 15, 2019: The House of Federation discussed unabated lockdown in Srinagar and various national issues including political victimization, ban on media, dissolution of Pakistan Medical and Dental Council and economic situation of the country during its 294th session, observes Free and Fair Election Network (FAFEN) in its Session Report on Friday.

The eight-sitting session requisitioned by the opposition continued between November 5, 2019 and November 15, 2019 to discuss curfew in Srinagar and important national as well as political issues on joint motions under Rule 218. The discussion on these motions consumed 78% (797 minutes) of the session’s time.

Forty-one lawmakers took part in debate on these motions under Rule 218. The debate on alleged political victimization, denial of
fundamental rights to members of Opposition parties and revocation of citizenship of a former Member of Parliament was concluded by the Minister for Parliamentary Affairs.

Each sitting, on average, started three minutes behind the schedule and continued for two hours and seven minutes. The Prime Minister did not attend any of the sittings. The Chairman presided over seven sittings for 15 hours and 22 minutes (91% of proceeding’s time) while the Deputy Chairman remained present in one sitting and presided over the
proceedings for 23 minutes (2%). The remaining six percent of the proceedings (57 minutes) were chaired by a member of Panel of Presiding Officers.

END_OF_DOCUMENT_TOKEN_TO_BE_REPLACED

TDEA-FAFEN Provides Evidence to Reject Allegations of Expelled Member
Islamabad, November 24, 2021: The Free and Fair Election Network (FAFEN) has categorically rejected the barrage of allegations, slander and insinuations being levelled by its…