ISLAMABAD, September 16, 2020: Sugar, rice, and wheat remained the most unregulated commodities in most parts of the country as markets in more than half of the districts disregarded these items’ officially notified prices.

These observations form part of the 20th Weekly Price Monitor issued by the Free and Fair Election Network (FAFEN). This monitor comprises a market survey of the prices of 15 basic groceries conducted on Thursday, September 10, 2020, in 30 cities,12 in Punjab, 11 in Balochistan, four in Khyber Pakhtunkhwa, and three in Sindh.

A two-week comparison of routine vegetables’ market prices, i.e., potatoes, onions, and tomatoes, showed varying patterns. Among the everyday groceries, the pulses’ prices remained mostly stable—almost a quarter of the surveyed districts, recording an increase or a decrease in the prices. Around two-thirds of the areas showed a decline or stability in vegetable rates during the reporting week compared to the previous one.

The meat prices also remained mostly stable except chicken, which showed a sharp increasing trend. Egg prices registered an increase in 55 percent districts, wheat flour in 24 percent, sugar in 17 percent, and milk and yogurt each in nine percent areas.

The following graphs show the overall trend of change in prices of essential edibles: 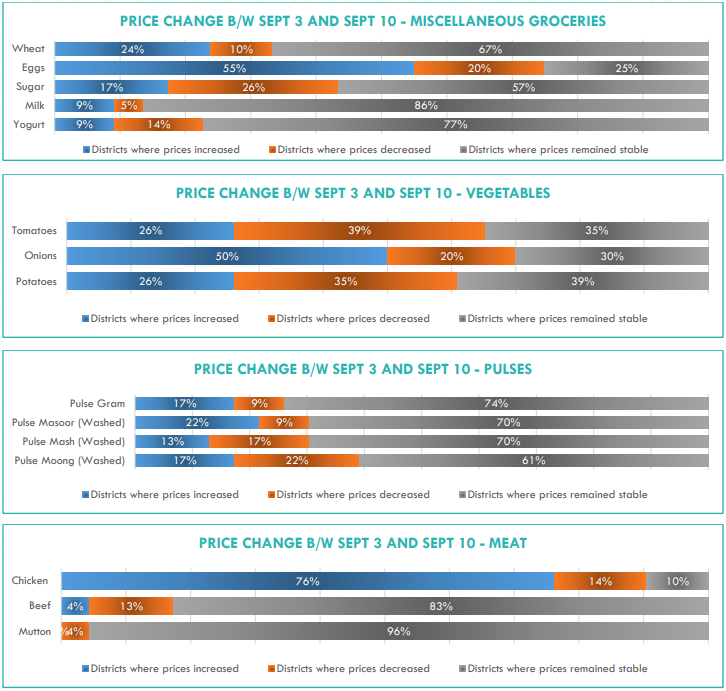 The officially notified price lists of essential commodities were unavailable in various parts of the country during the reporting week. The official rates of 20-kilogram wheat flour bags were not available in around 53 percent of the surveyed cities. Like previous weeks, the unavailability of official wheat flour rates at shops was most significant in Sindh and Khyber Pakhtunkhwa, where 75 percent and 100 percent of the districts did not have them.

The official rates of four pulses—moong, masoor, mash, and chana—were generally available in Khyber Pakhtunkhwa, Punjab, and Sindh. However, they were missing at several markets in Balochistan. Daal mash prices were unavailable in 55 percent of the markets, while 45 percent lacked daal masoor, and 36 percent daal chana rates. Another 10 percent did not have daal moong prices. At the same time, yogurt and milk rates were not publicly obtainable in 30 percent and 27 percent markets.

Mutton’s price remained the most unregulated, with 70 percent of the markets selling it at a higher rate than its official price. Similarly, beef, daal masoor, and chana were overpriced in 60 percent markets each. Like the previous weeks, the pulses’ overpricing was most prominent in Sindh, where no market sold any of the four pulses at official prices. Peshawar saw the highest rates of four pulses. In the meat category, mutton and beef (average quality with bone) were overpriced in 70 percent and 60 percent of the surveyed districts, and chicken in 30 percent. Traders sold wheat flour and refined sugar above the official rates in 43 percent and 33 percent districts. Of the four provinces, wheat price enforcement was the weakest in Balochistan, where 64 percent of markets sold it above the officially notified rates. The sugar price enforcement was the lowest in Sindh and Balochistan, where half of the surveyed markets sold it above the official prices.

The market rates of eggs per dozen were above the officially notified prices in 33 percent districts. Simultaneously, the yogurt and milk rates were higher than the official ones in 53 percent and 47 percent of the surveyed areas. 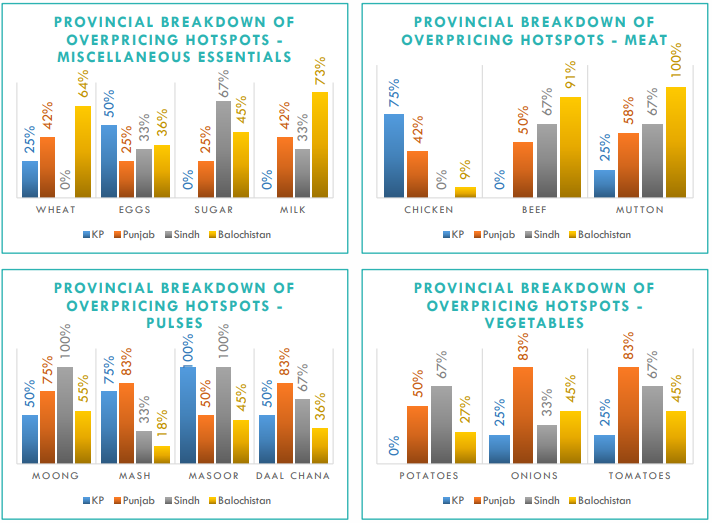 TDEA-FAFEN generates the Weekly Price Monitor covering 15 essential kitchen items, including wheat, pulses, oil, sugar, and perishable commodities like meat and vegetables. It does this considering the need for an independent and regular assessment of the availability of such items. The observers obtain the official prices from the officials of district administrations or market committees, and collect the wholesale prices through market surveys. In Punjab’s case, the government price app Qeemat Punjab is also used to get the official rates.