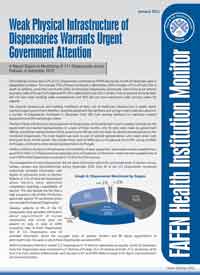 ISLAMABAD, January 31, 2011: The physical infrastructure of state-run dispensaries needs urgent attention of government as buildings of more than 37% of 111 dispensaries, monitored by FAFEN during the month of December were in dilapidated condition.

According to monthly FAFEN Health Institution Monitor, released here Monday, more than one fourth (26%) of the monitored dispensaries nationwide were found to be without boundary walls. In addition, 46% of the facilities did not have clean drinking water arrangements and 44% did not have washrooms (with running water) for patients. Basic equipment like sterilizers and syringe cutters were also absent in a number of dispensaries monitored in December. Only 39% had working sterilizers for sterilizing medical equipment and 65% had syringe cutters.