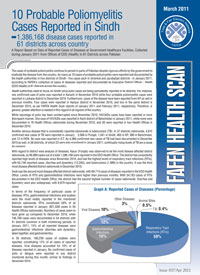 ISLAMABAD, April 13, 2011: Ten cases of probable poliomyelitis were reported in Health Offices in Sindh in January 2011 (five each in Umerkot and Jacobabad), according to FAFEN’s monthly Health Scan, a report analyzing the data of a selection of diseases gathered by FAFEN Monitors from Health Offices across Pakistan.

Cases of probable poliomyelitis continue to persist in parts of Pakistan despite rigorous efforts by the government to eradicate the disease (both probable poliomyelitis cases as well as confirmed cases of polio) from the country. The regions of Sindh and KP have reported 15 and six cases of probable poliomyelitis since November 2010 to January 2011. Reports from KP originated from the same district (Haripur) in both November and December. Furthermore, one confirmed polio case was also reported in Karachi district in November 2010.  Therefore, in general, greater attention is needed in this regard in all regions of the country.

EDO Health Offices in 19 districts of Punjab, 17 districts of Sindh, 14 districts of KP, and nine of Balochistan, as well as the office of the Agency Surgeon Health in FR Peshawar, and that of the Health Management Information System in ICT shared the information about reported cases of diseases with FAFEN Monitors.

Apart from cases of polio, other serious diseases were also reported. One case of suspected HIV/AIDs was reported in Kech district of Balochistan in January 2011. The reportage of the disease in recent months has remained discrepant; no cases were documented in 76 Health Offices nationwide during November 2010, while 30 were reported in two Health Offices in December 2010. Tuberculosis (TB) also continues to rise, as 4,910 confirmed new cases were reported in 37 districts nationwide in January. In the previous month, December 2010, 4,366 confirmed new cases of TB had been reported in 36 districts, 23 of which were monitored in January 2011 as well.