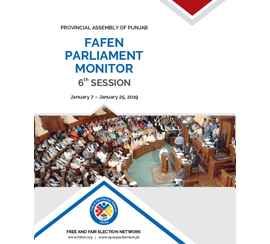 ISLAMABAD, January 30, 2019: Nearly three quarters (73%) of the legislators did not participate in the proceedings of the Provincial Assembly of the Punjab during sixth session that continued between January 7 and January 25, 2019.

As many as 101 lawmakers or 27 percent of the total membership including 29 women and 72 men participated in the proceedings of the House by contributing to the agenda and/or participating in debates. The participating lawmakers included 46 members each of PTI and PML-N, five of PML, three of PPPP and one of PRHP.

The remaining 268 (73 percent) lawmakers including 41 women did not participate in the proceedings throughout the session. The non-participating members included 132 belonging to PTI, followed by PML-N (121), PML (six), PPPP (five) and four independent lawmakers.

The House addressed 95 percent of its scheduled business including six government bills, as many amendments to the Assembly’s Rules of Procedure, 15 resolutions, nine Calling Attention Notices (CANs), 22 Adjournment Motions (AMs), 13 Zero Hour Notices and 209 questions including 84 Starred Questions. Additionally, the House adopted three supplementary resolutions during the proceedings. On the other hand, the Assembly skipped two scheduled discussions on farmers’ issues and annual reports of development authorities.

The lawmakers discussed the incident of civilian killings in Sahiwal for an hour and 44 minutes while the government also briefed the House in-camera during 14th sitting. Moreover, the House spent six hours and seven minutes (20 percent) on Points of Order discussing issues related to governance, law and order, education and House business while the sitting remained suspended for an hour and three minutes (five percent) due to lack of quorum or breaks.

On an average, 198 lawmakers were marked present during the sixth session (excluding the sitting held in-camera) as compared to 221 lawmakers during previous session. The opposition lawmakers staged seven walkouts and two protests over the issues related to business of the House, problems faced by journalists and placing the names of PPPP leadership on Exit Control List (ECL). Moreover, they identified the quorum four times that led to suspension of the proceedings for 10 minutes and two early adjournments of sittings.