77 Senators Not Contributed to Debate on Finance Bill 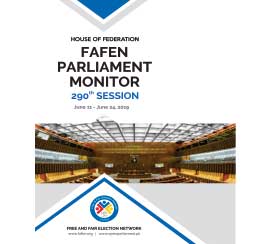 ISLAMABAD: The non-traditional conclusion of the budget debate by the treasury benches was the hallmark of 290th Session of the House of Federation that mainly witnessed discussion on the federal budget 2019-20 amid severe criticism by the lawmakers from each side of the aisle, observes Free and Fair Election Network (FAFEN) in its Session Report.

The Senators made 18 percent more recommendations on the Finance Bill, 2019 for the consideration of the National Assembly as compared to the Finance Supplementary (Second Amendment) Bill, 2019, while their participation in the budget debate witnessed a decline of nine percent, an analysis of the Senate’s proceedings revealed.

Minister of State for Revenue laid a copy of the Finance Bill, 2019 in the House inviting Senators’ recommendations on the bill. The House witnessed low interest of lawmakers in the debate as 77 among them did not contribute to the debate. Among them, 15 were female legislators while 62 were male lawmakers. The non-participating female lawmakers were five from PPPP, three from PML-N, two each from PTI and MQM, and one from PkMAP, whereas two female Independent lawmakers also did not contribute anything to the budget debate.

Government presents Finance Bill 2021 in Balochistan Assembly
SLAMABAD, June 18, 2021: The Provincial Assembly of Balochistan witnessed the presentation of Provincial Annual Budget for the Financial Year 2021-2022 and the Supplementary Budget for…