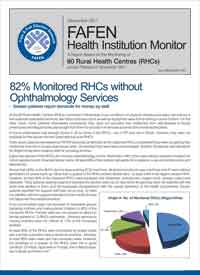 ISLAMABAD, December 26, 2011: A Free and Fair Election Network (FAFEN) report on Monday said specialized services like labour and eye rooms as well as equipment were found lacking in some of the 80 Rural Health Centres (RHCs) monitored in November.

The report said 82% of the RHCs did not have ophthalmology rooms. More than a fifth (22%) were without operation theatres for minor operations and 18 lacked labour rooms. At least 80% of the centres had wards for in-patients, x-ray and dental rooms and laboratories.

Almost half (48%) of the RHCs did not have working ECG machines, 26 lacked functional x-ray machines and 27 were without generators for power back-up.

More than a quarter of the RHCs lacked wheelchairs – at least a fifth in all regions except FATA. However, at least 80% of the observed RHCs were equipped with stretchers, ambulances, oxygen tents, syringe cutters and sterilizers.

According to the report, 37 patients interviewed by FAFEN monitors at the observed RHCs complained they were not getting free medicines from the in-house pharmacies while 20 reported they were being overcharged. Another 16 patients said demands for illegal money were made by staff for providing services.

Thirty patients seeking treatment reported the doctors were not on duty while 46 said they were not satisfied with the short time allotted to them and 39 expressed dissatisfaction with the overall behaviour of the health practitioners.

Eleven patients reported the support staff was not on duty, 22 were not satisfied with the support extended to them while 35 were not happy with the overall behaviour.

In-house pharmacies had enough stocks in all but three of the RHCs – two in KP and one in Sindh. However, they were not available for free (as per doctors’ prescriptions) at six RHCs.

At least 90% of the RHCs were connected by proper roads with a similar proportion having electricity and fans.

Similarly, at least 80% were clean and had boundary walls. However, the buildings of a quarter of the RHCs were not in good condition. Of these, eight were in Punjab, five in Balochistan, four in Sindh and three in KP.

Nearly half (47%) of the monitored RHCs did not have telephone landlines. At least 80% of the centres had washrooms with running water and properly shaded waiting areas for patients. More than a third (34%) did not have arrangements for clean drinking water.