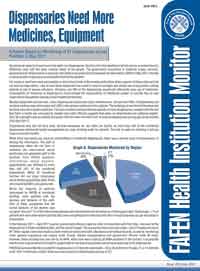 ISLAMABAD, July 3, 2011: Government needs to invest more in the state-run dispensaries, the first unit in the healthcare infrastructure, to enable them to effectively cope with the basic medical needs of the people.  Investment in medicine supply, services, equipment and infrastructure is seriously warranted since government dispensaries observed by FAFEN in May 2011 showed a worrying lack of capacity to provide safe treatment to patients, according to the FAFEN Health Institution Monitor, released here on Sunday.

For instance, sterilizers were not available in almost two thirds of the monitored facilities while a quarter of those observed did not have syringe cutters. Lack of such basic equipment can result in reuse of syringes and unsafe use of equipment, putting patients at risk of serious infections.