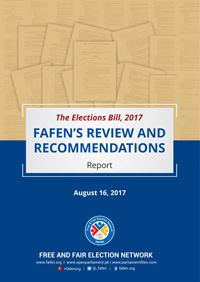 ISLAMABAD, August 16, 2017: Free and Fair Election Network (FAFEN) urges the Parliament to address critical weaknesses in the proposed Elections Bill, 2017 to enhance independence and authority of the Election Commission of Pakistan (ECP), repeal regressive measures to curb transparency, improve procedure of the appointment of caretaker governments and dilute monopolies of a few families on political organization.

An exhaustive parliamentary discussion is required on the proposed electoral reforms in an effort to enact a legislation that reflects the aspiration of all political actors in the country. This will also potentially increase people’s trust over election system.

The Elections Bill, 2017 was presented in the National Assembly on August 7, 2017. Though FAFEN appreciates the finalization of the Bill by the multi-party Parliamentary Committee on Electoral Reforms, the network of over 50 leading Pakistani Civil Society Organizations (CSOs) strongly believes that critical improvements are still required in the proposed legislation for future elections to be more inclusive, transparent, accountable and representative of the election outcome.

In particular, the proposed law does not define a procedure for the Commission to penalize any public servant or any other person in the service of Pakistan performing their election duty dishonestly. The Commission has been empowered to only withdraw or suspend such officials but does not adequately empower it to penalize them. Even though the bill has empowered the ECP to initiate disciplinary action against officials appointed on election duties, it is still unclear whether officials seconded from subordinate judiciary to perform such duties will be also be covered.

Moreover, the proposed legislation has created ECP’s dependence on the government when there is any difficulty in giving effect to any of the provisions of the Elections Bill, 2017. The government will forward such provisions to the Parliament, however, there is no timeframe defined for such referrals. The provision is inconsistent with powers granted to the Commission under Section 4(3) which empowers it to take any action that it considers necessary to enforce the law.

The Bill provides for inconsistent powers to the Commission regarding the disqualification of elected Members. The Commission may disqualify a Member for a second violation of the Code of Conduct for Political Parties and Candidates or if the Member is involved in an agreement to bar women from voting. However, it cannot disqualify a Member who has submitted a false return of election expense or wealth statement. The law still allows the ROs to take any action that they deem essential to implement the law, giving them a discretionary space that has often been misused.

The introduction of Results Management System (RMS) may prevent election fraud and irregularities; however, the bill does not provide for Commission’s scrutiny of final consolidated result before the gazette notification of the returned candidate to optimize the use of RMS. Similarly, the Elections Bill, 2017 includes some positive measures related to women’s participation, but has missed the opportunity to take crucial initiatives on behalf of the electoral rights and political participation of other marginalized communities, including religious minorities, persons with disabilities, and transgendered individuals.

The Bill is particularly regressive on the issue of access to information, which is protected under Article 19-A of the Constitution. Section 195(c) of the Bill restricts access to crucial election information. Such provisions clearly indicate an effort to curb access to information, and are unacceptable. FAFEN strongly recommends the section be withdrawn. Moreover, the Bill also fails to impose time requirements on the Election Commission to make publicly available all the critical documents including nomination papers, election expense returns by the candidates, candidates’ wealth statements and all certifications by the political parties.

Other major issues that warrant Parliament’s urgent attention are the provision of access to election processes to media. The Bill defines the observers’ access to election processes; however, it still remains silent as far as the media is concerned. Moreover, the exclusion of ballots from count at polling stations has not been dealt with as rejected votes, while the recount requests during consolidation proceedings have not been allowed. Canvassing and campaigning on the election-day is not completely banned. The Bill also does not provide for a timeframe for election on reserved seats for Local Governments. Moreover, the Section 238 explaining the accreditation process for election observers also emphasizes on the requirement of security clearance from the Government creating unnecessary hurdles for election monitoring groups. The Bill also does not define the expense limit on political parties. The law should define the election expense limit on political parties proportional to their candidates contesting elections on National and Provincial Assemblies seats. Moreover, the Bill should also further define measures for the use of Biometric Voting Machines (BVMs) and oversees voting ahead of 2018 General Elections.

The presentation of the Elections Bill, 2017 provides for an opportunity to the Parliament to not only consider corrections to the proposed legislation, but also deliberate on finalizing the required constitutional amendments that could potentially contribute to avoiding post-election tensions between political parties witnessed in 2013.  The constitutional amendment pertaining to appointment of caretaker government needs to be amended to make the process for their appointment transparent and broad-based including representation of parliamentary parties in the relevant parliamentary committee. Moreover, public hearings of all potential nominees for the caretaker prime and chief ministerial posts by the parliamentary need to be made mandatory.

In addition, the constitutional amendment is also required to prohibit candidates contesting elections on multiple seats. Such practice burdens the state exchequer due to subsequent by-elections. In 2013 General Elections, as many as 136 candidates contested in multiple National and Provincial Assemblies constituencies due to which 45 by-elections were held. Similarly, the constitutional amendment must review the minorities’ quota in elected houses that is on the decline. For example, 10 minority seats were reserved for National Assembly of 210 members between 1988 and 1997. In 2002, the strength of Lower House increased to 342 members, however, the quota for Pakistan’s minority population remained the same. Currently, there are 10 seats for minorities in the incumbent 14th National Assembly with a majority, seven seats are occupied by members from the Hindu community, while three belong to the Christian community. Other religious minorities are not represented in the assemblies at all.

Another important consideration for the Parliament is to look into the issue of political monopolies and control of some families over political parties. Stricter measures are required to make political parties more representative through term restrictions, transparent inner-party elections, etc. Similarly, indirect elections to the Senate must be replaced with direct elections as it will restrict the ability of party leaders to induct members based on nepotism and not merit.

FAFEN strongly believes that the enactment of the new Election Bill should be swift allowing time for the ECP to ensure its timely and effective operationalization, and political parties and other stakeholders to fully understand it. However, critical amendments to the new electoral framework are needed to enable the proposed reforms to be fully realized and to prevent further problems. Once the Bill is approved by the Parliament, it will become an Act, and if passed in its present condition, the ECP will encounter various challenges in conducting free and fair elections, while other stakeholders including voters, political parties and contesting candidates will also confront issues concerning their participation, representation and inclusiveness.