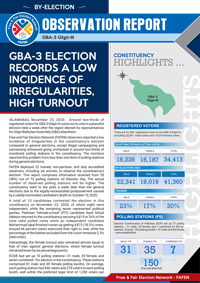 ISLAMABAD, November 23, 2020:  Around two-thirds of registered voters for GBA-3 Gilgit-III came out to vote in a peaceful election held a week after the region elected its representatives for Gilgit-Baltistan Assembly (GBA) elsewhere.

Free and Fair Election Network (FAFEN) observers reported a low incidence of irregularities in the constituency’s election compared to general elections, except illegal campaigning and canvassing witnessed going unchecked in around two-thirds of monitored polling stations in the constituency. The monitors reported this problem from less than one-third of polling stations during general elections.

FAFEN deployed 22 trained, non-partisan, and duly accredited observers, including six women, to observe the constituency’s election. This report comprises information received from 35 (48%) out of 73 polling stations on Election Day. The actual number of observed polling stations will be higher. The constituency went to the polls a week later than the general elections due to the legally necessitated postponement caused by a validly nominated candidate’s death on October 10, 2020.

A total of 15 candidates contested the election in this constituency on November 22, 2020, of which eight were independent, while the remaining seven represented political parties. Pakistan Tehreek-e-Insaf (PTI) candidate Syed Sohail Abbass returned to the constituency securing 6,815 or 26% of the total valid polled votes while an independent candidate Muhammad Iqbal finished runner-up getting 4,872 (18.3%) votes. Around 66 percent voters exercised their right to vote, while the percentage of the ballots excluded from the count remained 2.5% (666 votes).

Campaigning and Canvassing: The ECGB’s code of conduct for contesting candidates and political parties prohibits the candidates or their supporters from the exhibition of campaign material in or outside the polling station. It also bars persuading voters on polling day and establish camps beyond 400 meters in rural areas and 100 meters in densely populated urban areas from the polling stations. FAFEN observers noted party camps’ presence in the prohibited limits of 23 out of 35 observed polling stations. They also reported seeing campaign material of candidates or political parties inside six polling stations. Besides, the observers noted three instances of political workers found persuading the voters.

FAFEN observers recorded six instances at the observed polling stations where persons other than voters, including polling agents, stamped the ballots. Moreover, they reported three cases of unauthorized individuals accompanying voters behind the screen.

The monitors reported no major incident of violence inside or outside the polling station on the day.