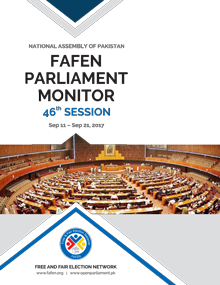 ISLAMABAD, September 25, 2017: The National Assembly left its 38% agenda unaddressed amidst low attendance of lawmakers and frequent adjournments due to lack of quorum during 46th session, observes the Free and Fair Election Network in its session report based on the direct observation of the House proceedings.

The Lower House managed to take up 62% of the business listed on the Orders of the Day. The remaining agenda items were either dropped due to absence of the concerned lawmakers or were not taken up due to the suspension or adjournment of the House proceedings owing to lack of quorum. Five out of the session’s nine sittings were adjourned due to this reason.

The session comprised nine sittings spanning over 21 hours and 42 minutes. Each sitting, on average, continued for two hours and 24 minutes. The Prime Minister did not attend any sitting while the Leader of the Opposition was present in five sittings.

According to official record of the plenary’s attendance records, 173 (50%) lawmakers attended each sitting on an average. The highest attendance – 211 members present – was recorded during last sitting while the lowest attendance – 98 members present – was during sixth sitting. As per the headcounts conducted by FAFEN at commencement and conclusion of the sittings, on average 49 lawmakers were present at the commencement and 47 at the adjournment of every sitting.