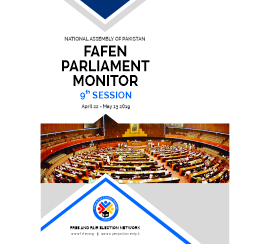 ISLAMABAD, May 16, 2019: The National Assembly transacted 71 percent of its scheduled business during its ninth session with 173 lawmakers participating in the proceedings. The House passed one private members’ bill to increase representation of ex-FATA in National and Khyber Pakhtunkhwa Assemblies while it also witnessed introduction of 26 other private members’ bills during the session that continued between April 22 and May 13, 2019.

The regular and supplementary agenda brought before the House during ninth session comprised 44 private members’ bill and 17 government bills, 14 resolutions, 20 Calling Attention Notices (CANs), ten standing committee reports, 11 motions under Rule-259, a motion of thanks and four amendments to the Rules of Procedure and Conduct of Business in National Assembly .

Of 342 lawmakers, 173 (51 percent) including 126 men and 47 women contributed to the proceedings of the House by sponsoring various parliamentary interventions and/or contributing in the debates. Among the participating lawmakers, 60 belonged to PTI, 50 to PML-N, 32 to PPPP, 13 to MMAP, four to BNP-M, two each to BAP, GDA and Independent and one of PML.

The House proceedings commenced with an average delay of 23 minutes in each sitting while none of the sitting started on its scheduled time. The maximum delay of 43 minutes was witnessed during 12th sitting. The shortest sitting during the session i.e. 10th sitting, continued for an hour and 23 minutes, whereas the longest sitting i.e. sixth sitting, continued for four hours and 20 minutes.

Though the question of quorum did not surface throughout the session, the proceedings were interrupted on six occasions by the opposition lawmakers’ protests. They took exception to the remarks of various cabinet members and hike in petroleum prices. As many as two sittings were adjourned while the protests and sloganeering were underway in the House.

Government presents Finance Bill 2021 in Balochistan Assembly
SLAMABAD, June 18, 2021: The Provincial Assembly of Balochistan witnessed the presentation of Provincial Annual Budget for the Financial Year 2021-2022 and the Supplementary Budget for…