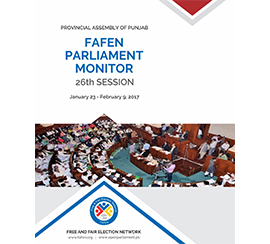 ISLAMABAD, February 12, 2017: Punjab Assembly’s 26th session was marked by lack of quorum, hasty legislation and treasury’s disinterest in lawmakers’ adjournment motions on public importance matters. The opposition lawmakers pointed out the absence of quorum 17 times during the session that spanned over 14 sittings. Three sittings were adjourned and four had to be suspended for want of quorum. The official attendance statistics show that maximum attendance during at least six sittings was less than the quorum (one fourth of total membership i.e. 93 members). Among the key parliamentary figures, the Chief Minister (Leader of the House) remained absent throughout the session while Speaker, Deputy Speaker and the Leader of the Opposition attended 14, six and 13 sittings respectively.

The session also witnessed adoption of 13 resolutions and presentation of eight committee reports. Meanwhile, the lawmakers asked 408 questions, submitted nine Calling Attention Notices (CANs) and brought 33 Adjournment Motions (AMs) on the agenda. Eleven of the lawmakers’ questions went unanswered while majority of Starred Questions (56%) were not discussed on the floor of the House. All CANs were addressed but all AMs except one remained unaddressed till the prorogation of the session. Besides these interventions, the government also included six general discussions on performance of various government departments and ministries in the Assembly’s formal business. Two of these discussions could not take place while the four discussions consumed six hours and 50 minutes.

As many as 13 instances of protests or walkouts were observed during the session. These protests or walkouts were staged to show lawmakers’ concerns over issues like Panama Leaks controversy, allocation of development funds, passage of Punjab Civil Administration Bill, 2017, treasury and chair’s alleged discrimination against opposition’s agenda and Hafiz Saeed’s detention.