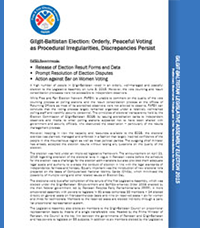 The election to the Gilgit-Baltistan Legislative Assembly on June 8, 2015 witnessed an impressive turnout of voters in a peaceful and well-managed polling process. However, the vote counting and result consolidation processes were not accessible to independent observers, says Free and Fair Election Network (FAFEN) in its preliminary observation report on Wednesday. Despite an efficient accreditation process by the Election Commission of Gilgit-Baltistan (ECGB), the principles of electoral transparency appeared not to have been shared with the government and security officials, who obstructed FAFEN’s observers – particularly of the results consolidation process.

END_OF_DOCUMENT_TOKEN_TO_BE_REPLACED
Publication Categories
All rights reserved. Any part of the webpage may be produced or translated by duly acknowledging the source, all content is copyrighted © 2006-2020 Free & Fair Election Network