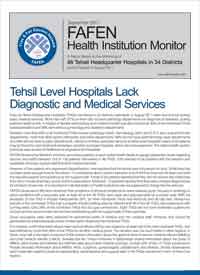 ISLAMABAD, November 3, 2011: Forty-six Tehsil Headquarter Hospitals (THQs) monitored in 34 districts nationwide in August 2011 were found to be lacking basic medical services, according to a report released by Free and Fair Election Network (FAFEN) on Wednesday.

It said more than half – 57% – of them did not have pathology departments while 40% of the monitored THQs lacked pediatrics and 38% were without gynecology and obstetrics departments.

Similarly, more than 90% of all monitored THQs lacked cardiology (heart), dermatology (skin) and E.N.T. (ear, nose and throat) departments, more than 80% lacked orthopedic and chest departments, and 66% and 26% did not have ophthalmology (eye) and surgery departments respectively. Absence of these specialist services at THQs means that patients may be forced to seek treatment elsewhere, possibly from private hospitals, which are more expensive.

The report said conditions of physical infrastructure were relatively good. Housed in buildings with a boundary wall, at least 40 of the 46 THQs were clean and approachable by a proper road. With the exception of one THQ in KP, all other monitored THQs had electricity. As all had fans, ninety-four percent of the monitored THQs had a properly shaded waiting area for patients. Though 40 of the 46 THQs had washrooms with running water, only 28% had Sui gas connections. Eight THQs did not have residential quarters for doctors and the same number lacked residential quarters for support staff on their premises.

The report said FAFEN monitors interview up to three patients at each visited health facility to gauge satisfaction levels about doctors’ and staff’s behavior. Out of 135 patients interviewed in 46 THQs, 73% seemed to be satisfied with the behavior and availability of doctor, support staff and other medical services.

However, of the patients who expressed dissatisfaction, eight reported that the doctor was not present on duty, 19 felt they had not been given enough time by the doctor, 14 complained about doctor’s behavior and 23 felt that they had not been provided the required support and guidance by the support staff.

Though good occupancy rates were observed for sanctioned posts of medical and non medical staff, the report said the monitored THQs were reluctant to share information.

The report said elected representatives and government officials made 66 visits to the monitored THQs in June to August this year.