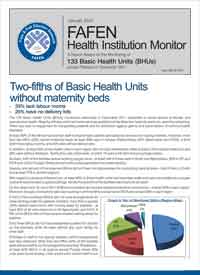 FAFEN Governance Monitors visited 133 BHUs in 87 districts nationwide- 65 in 34 districts in Punjab, 28 in 21 districts in KP, 24 in 16 districts in Sindh, 13 in as many districts in Balochistan and three in as many agencies in FATA. The report said more than two-fifths (42%) BHUs lacked maternity beds, a third didn’t have labour rooms, and 25% were without delivery kits. However, at least 80% of the BHUs had women staff to treat female patients and had advisory services for nursing mothers.

In addition, at least 60% of the health units in each region did not have wheelchairs while at least a third lacked stretchers and 26% were without sterilizers. Twenty-five BHUs nationwide, of which 15 were in KP, did not have syringe cutters. Similarly, 44 percent of the facilities lacked working oxygen tents and90% lacked generators for power backup.

The report said 71% percent of the observed BHUs did not have mini laboratories for conducting medical tests – half of them in Sindh and at least 70% in all other regions. With regard to physical infrastructure, at least 80% of these health units had boundary walls, were accessible by a proper road, housed in good buildings and 95% of the facilities were found to be clean. On the other hand, 81 out of the total 133 BHUs monitored did not have telephone landline connections – at least 50% in each region. Moreover, Sui gas connections were also lacking in all three BHUs observed in FATA and at least 90% in each region.

A third of the monitored BHUs did not have arrangements for clean drinking water for patients, 28% lacked washrooms with running water for patients and a fifth did not have proper shaded waiting areas for patients. Forty-three BHUs did not have residential quarters for doctors on the premises while 44 were without any such facility for other staff. Ten patients – nine in FATA and one in Punjab reported demands for illegal money at the monitored BHUs while 25 felt they were overcharged. Thirty-nine patients complained they did not get medicines as per doctor’s prescription free of cost from the in-house pharmacy.