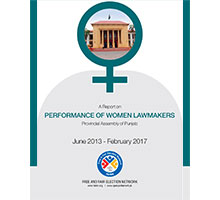 FAFEN releases report on the performance of provincial women lawmakers

LAHORE, March 7, 2017: Women legislators performed better than their male counterparts during proceedings of the Provincial Assembly observed between June 2013 and February 2017, despite their less strength in the Punjab Assembly, says Free and Fair Election Network (FAFEN) on Tuesday.

A ceremony was arranged at the Punjab provincial capital to pay tributes to women legislators for their remarkable contribution in enriching the agenda of the House. Speaker Punjab Assembly Rana Muhammad Iqbal Khan was the Guest of Honour, who presented shields to women lawmakers on behalf of Trust for Democratic Education and Accountability – Free and Fair Election Network (TDEA-FAFEN). The ceremony also coincides with the International Women’s Day being commemorated across the globe on March 8.

TDEA-FAFEN former Chairperson Zahid Islam gave overview of the working of FAFEN. He eulogized the services of women legislators despite having considerably low representation in the legislatures as well as the government.

Executive Director of Shirkat Gah Ms. Farida Shaheed called for institutionalizing mechanisms for women participation in policymaking.  She welcomed the establishment of Standing Committee on Gender Mainstreaming in the Punjab Assembly.

TDEA-FAFEN representative Shehzad Anwer gave detailed presentation on the findings of the report released on the performance of women legislators who make up 20% of the Assembly while their presence in the provincial cabinet is only 11 percent. However, despite their less numerical strength, they give tough competition to their male counterparts on nearly all indictors of the parliamentary performance. Not only the Punjab women lawmakers were observed to be more regular in Assembly attendance, they are also generous in contributing to the agenda and debates of the House.

The analysis of attendance records show that 69% of women tend to attend a sitting as compared to 48% men. Each woman lawmaker attended 111 sittings on average during the reporting period whereas each male lawmaker attended 86 sittings. The women participation rate was also slightly higher than men. Eighty-one percent women took part in the proceedings by contributing to agenda and/or debates as compared to 80% men.

The women lawmakers’ contribution to the Assembly business was high in proportion to their representation in the Assembly. Nearly one third of the public importance business was originated by women. They sponsored 33% of questions, 31% of resolutions and adjournment motions each and 21% of Calling Attention Notices. Furthermore, 17% Questions of Privilege and Zero Hour Notices were originated by women.

The agenda initiated by women related to the sectors like governance, education, health and social welfare. Besides these, women lawmakers were also inclined to raise the issues of their gender in the Assembly. They highlighted the matters related to women’s health, violence against women, female education and employment.

The Assembly also took legislative action on many women-specific issues. It legislated for increasing the representation of women in policy-making bodies as well as for protection of women against violence. It also passed laws to put in place institutional mechanism for regulation of employment conditions for women, restriction of child marriages and mandatory provision of maintenance by husbands for their wives and children. The resolutions of the Assembly recommended the government to improve women’s health and facilitate women citizens in government offices.