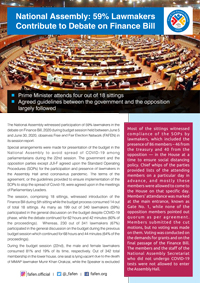 ISLAMABAD: The National Assembly witnessed participation of 59% lawmakers in the debate on Finance Bill, 2020 during budget session held between June 5 and June 30, 2020, observes Free and Fair Election Network (FAFEN) in its session report. Read more

END_OF_DOCUMENT_TOKEN_TO_BE_REPLACED 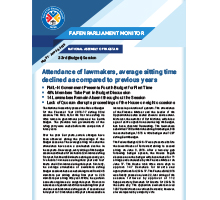 PML-N Government Presents Fourth Budget for First Time 48% Members Take Part in Budget Discussion 14 Lawmakers Remain Absent throughout the Session Lack of Quorum disrupts proceedings of the House on eight occasions The National Assembly passed the Federal Budget for the Financial Year 2016-17 during 33rd session. The PML-N, for the first time during…

END_OF_DOCUMENT_TOKEN_TO_BE_REPLACED 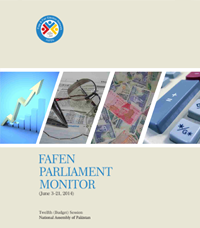 The National Assembly’s twelfth (budget) session was marked by the approval of the federal budget for the fiscal year 2014-15. The House passed the Finance Bill after incorporating 43% of the recommendations proposed by the Senate. Other legislations, including the Anti-terrorism (Amendment) Bill 2014, were also passed amid protests and low attendance of members.

END_OF_DOCUMENT_TOKEN_TO_BE_REPLACED 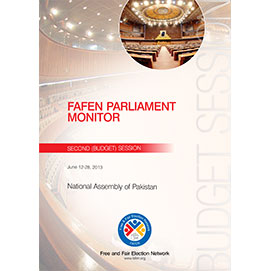 Only 41% of legislators took part in the first budget session of the 14th National Assembly as the government’s decision to implement the increase in the General Sales Tax (GST) before the passage of the budget was criticized by the opposition. On the other hand the Supreme Court also ruled the government had no legal authority to levy and charge 17 per cent GST without the parliamentary approval. The session, that spread over 13 sittings from June 12 to June 28, 2013, lasted 85 hours. On average, each sitting started 20 minutes late and met for six hours and 32 minutes.

END_OF_DOCUMENT_TOKEN_TO_BE_REPLACED
Publication Categories
All rights reserved. Any part of the webpage may be produced or translated by duly acknowledging the source, all content is copyrighted © 2006-2020 Free & Fair Election Network