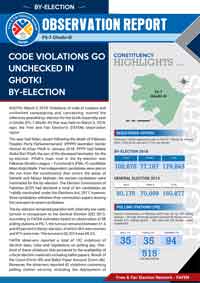 GHOTKI, March 5, 2018: Violations of code of conduct and unchecked campaigning and canvassing, marred the otherwise peaceful by-election for the Sindh Assembly seat in Ghotki (PS-7 Ghotki-III) that was held on March 5, 2018, says the Free and Fair Election’s (FAFEN) observation report.

The seat had fallen vacant following the death of Pakistan Peoples Party Parliamentarians’ (PPPP) lawmaker Sardar Ahmad Ali Khan Pitafi in January 2018. PPPP had fielded Abdul Bari Pitafi, the son of the deceased lawmaker, for the by-election. Pitafi’s main rival in the by-election was Pakistan Muslim League – Functional’s (PML-F) candidate Mian Abdul Malik. Five Independent candidates were also in the run from the constituency that covers the areas of Daharki and Mirpur Mathelo. No women candidates were nominated for the by-election. The Election Commission of Pakistan (ECP) had declared a total of ten candidates as “validly nominated’ under the Elections Act, 2017; however, three candidates withdrew their nomination papers leaving the race open to seven candidates.

The by-election remained peaceful with relatively low voter turnout in comparison to the General Election (GE) 2013. According to FAFEN estimates based on observation of 98 polling stations in PS-7, the turnout remained between 41.6 and 43 percent in the by-election; of which 36% were women and 47% were men. The turnout in GE 2013 was 58.2%.

FAFEN observers reported a total of 192 violations of election laws, rules and regulations on polling day. One-third of these violations (64) pertained to the availability of critical election materials including ballot papers, Result of the Count (Form-45) and Ballot Paper Account (Form-46). Moreover, the observers reported 42 violations concerning polling station security, including the deployment of untrained security staff. The observers also witnessed 32 irregularities related to campaigning and canvassing, 16 to the training of election staff, 10 to breach of secrecy and 22 to other polling day processes.

The ECP did not effectively enforce particular provisions in the Elections Act, 2017 that should ensure efficient flow of polling processes, prompt collection of election results and maximize electoral transparency. As many as 13 Presiding Officers did not receive training on using Result Transmission System (RTS) while 15 polling stations lacked adequate number of various forms and packets used to prepare and dispatch election results. Furthermore, the ECP did not upload various election-related documents including the List of Proposed Polling Stations (Form-28), the Final List of Polling Stations, the List of Validly Nominated Candidates (Form-32), and the List of Contesting Candidates (Form-33) on its website.

FAFEN deployed 30 trained and non-partisan observers including 19 men and 11 women to observe the by-election. Sardar Ahmed Ali Pitafi, who died of cancer, successively won this seat during GE 2008 and retained it in GE 2013; bagging 41.1% and 43.1% of the polled votes in each election respectively. The turnout in the constituency was recorded at 58.82% in 2013 and 51.82% in 2008. He had lost the seat to Nadir Ahmad Khan Laghari of the National Alliance in GE 2002.

FAFEN observed the voting process at 98 polling stations and counting at 29 polling stations.  The observers also collected Form-45 (Result of the Count) and Form-46 (Ballot Paper Account). FAFEN employs a standardized checklist for observing a comprehensive set of polling-day activities, including the opening and closing of polling stations, security arrangements, campaigning and canvassing around and inside polling stations, ballot processing, facilitation to the disabled and elderly voters, counting, and result consolidation processes. Trained non-partisan observers were deployed in PS-7 who spent a period ranging from 45 minutes to 60 minutes at each polling station to record their observation on the checklists. The observation also included interviews of Presiding Officers regarding election arrangements.

Presence of Election Staff and Availability of Critical Election Materials: According to FAFEN observers, some polling stations lacked adequate quantities of essential election materials. Moreover, at one polling station, the number of Assistant Presiding Officers (APO) was less than the number of total booths. In order to ensure efficient voting processes according to election laws and bye-laws, an APO and a Polling Officer must be present at each polling booth in a polling station. In addition to this, polling staff were not present at two polling stations at the official start time of polling, i.e. 8:00am. Four polling stations lacked sufficient numbers of Form-45 (Result of the Count), i.e. fewer forms than the number of candidates. Similarly, five polling stations did not have sufficient quantity of Form-46 (Ballot Paper Account). Similarly, 49 polling stations had fewer ballot papers than registered voters. Under the Elections Rules, 2017, the ECP has introduced separate packets numbered from one to 19 to pack and seal election-related materials at the end of polling. However, six Presiding Officers reported to have received fewer packets than required. Yet, the ECP ensured that all polling booths had transparent ballot boxes, secrecy screens, electoral rolls, official ECP stamps, ink pads, indelible ink and other required stationery.

Security Arrangements: The ECP had sought assistance from the Pakistan Army to ensure fool-proof security inside and outside polling stations on Election-Day. According to a notification issued by the ECP, the designated Army officials were given First Class Magisterial powers in case of personation of a voter, capturing of polling stations, illegal canvassing or illegal practices related to the polling process. The ECP had declared 130 polling stations as sensitive.

Voter Identification and Ballot Processing at Polling Stations: Through its trainings, the ECP significantly improved the processing of voters at polling stations – from identification of voter to the issuance of ballot paper.  However, further improvement is needed to ensure complete enforcement of these critical processes. At six polling booths, polling officers were either calling out the names of voters in a low voice or not calling them out at all before crossing out their names on the electoral rolls. At two booths, Polling Officers did not cross out voters’ names on the electoral roll. At one polling booth, an APO did not mention the voter’s gender on the counterfoil while at another, an officer was not taking voters’ thumb impressions on counterfoils.

Breach of Secrecy: The protection of the right of voters to secrecy has also been significantly improved as compared to GE 2013. FAFEN observers reported from only one polling station that voters were accompanied by unauthorized persons behind secrecy screens in full view of election officials. Moreover, the polling staff and the polling agents were observed stamping the ballot papers on behalf of the voters at four and one polling stations, respectively.

FAFEN observers conducted interviews with Presiding Officers to know about the availability of election materials as well as any difficulties faced by them in performing their duties. As many as three Presiding Officers had not received any training from the ECP prior to the polling day while 13 Presiding Officers reported not receiving training on the Result Transmission System (RTS), a mobile application used to promptly collect polling results.