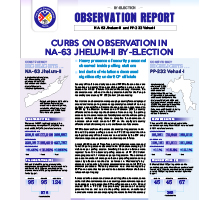 ISLAMABAD, August 31, 2016: Security officials barred duly accredited FAFEN election observers from observing nearly 10 percent of the polling stations in the by-election for NA-63 (Jhelum-II) held on Wednesday. However, the observation was allowed in the by-election held for the Punjab Assembly constituency PP-232 (Vehari-I) the same day.

Although the voting process went on smoothly and no major procedural irregularities were reported from either of the constituencies, there were 30 percent polling stations in PP-232 and 11 percent in NA-63 where critical election material such as election forms was not adequately provided by the respective Returning Officers.

The by-election in NA-63 Jhelum-II was announced in wake of the death of PML-N legislator, Nawabzada Iqbal Mehdi, who had won the seat in GE-2013 by securing 116,013 votes. However, the election on Punjab Assembly constituency PP-232 Vehari-I was announced following election tribunal’s decision to disqualify Chaudhry Muhammad Yousaf Kuselya for failure to fully disclose his financial details. Mr. Kuselya got elected as an independent candidate in 2013 general election bagging 50,350 votes.

Although a provincial constituency, election in PP-232 saw greater contestation as 11 candidates, including one woman, contested the election as opposed to four candidates, all men, running for NA-63. All the three major parties i.e. PML-N, PPPP, PTI, fielded their candidates in NA-63 along with one independent candidate whereas eight out of 11 candidates in PP-232 ran independently in addition to a contestant each from PTI, PML-N and Pakistan Kissan Ittehad.